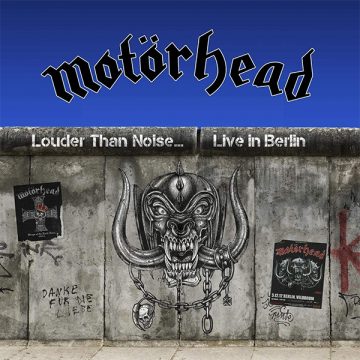 Despite passing away in 2015, the legacies of Lemmy Kilmister and Motörhead have remained among rock and metal’s most revered of titans. Since his passing, Motörhead have released a live album, a collection of covers, and a pair of box sets. Now, the band has released their fifth posthumous release – or their third new record – since the death of Kilmister, Louder Than Noise… Live In Berlin, marking their 14th live album. Recorded at the Berlin Velodrom on December 5, 2012, as a part of the band’s King Of The Road Tour, Louder Than Noise… Live In Berlin captures Kilmister alongside drummer Mikkey Dee and guitarist Phil Campbell – the final, most long lasting, and arguably, the strongest Motörhead line-up – at one of their biggest German performances in front of over 12,000 fans.

The excitement from the Velodrom as Motörhead takes the stage – even before they dive into the opener, “I Know How To Die” – can be felt, even through the speakers, nearly a decade later and halfway across the world. Motörhead may never have been among the greatest sellers or songwriters of rock, but their follow was, and still is, ravenous. Within just the first few songs, including “Damage Case”, “Stay Clean”, and “Metropolis”, it can be understood why. The band sounds larger than life built on the unrelenting powerhouse rhythms of Dee, Campbell’s thick wall of distortion, and Kilmister’s voice, even in his late ‘60s, sounding as fierce as ever.

If Louder Than Noise… Live In Berlin proves anything, it is that there is a particular timelessness to Motörhead’s unique brand of rock that tethered punk and metal in a manner that few are capable of even attempting.  Throughout the performance, there are a number of standout songs that stand apart from an already strong set. The swinging riff of “Over The Top” to the dirty, bluesy shuffle of “You Better Run”, and the overdriven punk fury of “Going To Brasil”, showcase a range in sound and tone among the album. This is furthered by “String theory”, the atmospheric and lyrical guitar solo that almost serves as an intermission halfway through the set. Despite that, it is their greatest of hits, “Killed By Death”, “Ace Of Spades” and “Overkill” that not only close the concert, but also act as showstoppers on the album.

A passion for music has always been a part of Gerrod’s life. As a young boy, he was raised on a steady diet of the music from The Chili Peppers, Aerosmith, The Stones, Prince, and others from his mum. Raised in the GTA, Gerrod continued to foster his love for music by attending a wide range of concerts and learning the drums. His unapologetic passion for music has no bounds and has spread to a wide variety of styles, whether it be the 90’s rock that sound tracked his teenage years, the jazz he studied in university, or his newfound love for hip-hop. He recently received his bachelors in music and education from York University and is passionate about writing and reviewing good (and less than good) music. Gerrod is also the drummer and songwriter for a Toronto based rock & roll band, One In The Chamber.
RELATED ARTICLES
album reviewalbum reviewslemmy
9.0