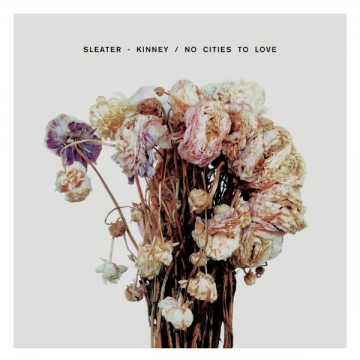 There is a scientific theory that nothingness is inherently unstable. That something eventually must happen. As such, our universe — and the Big Bang — necessarily had to occur. Indeed, the past decade of quietude from Sleater-Kinney was necessarily unsustainable. This is evidenced by their explosion back into existence with a big bang of energy and raw power. And damn does it sound good.

No Cities to Love is a 10-track suite of fast-rocking songs that comes on hard. There is an urgency apparent in each tune (especially on “Fangless” and “Surface Envy”). It sounds as if each member desperately needed to make this album, despite their busy schedules. And busy schedules they’ve had: since the band’s hiatus in 2006, Corin Tucker (vocals/guitar) put out two albums with the Corin Tucker Band; Carrie Brownstein (guitar/vocals) formed Wild Flag and stars in the comedy seriesPortlandia; and Janet Weiss (drums) recorded and toured with Wild Flag and Quasi, among a few others. With all that going on, one would imagine finding time for Sleater-Kinney would be rather difficult. If the trio were going to make this work, they were going to need to want it as bad as their fans wanted it. And that’s exactly what can be heard: dire and purposeful rock. As Brownstein says in the band’s press release, “we sound possessed on these songs, willing it all – the entire weight of the band and what it means to us – back into existence.”

Current fans will notice some differences, though. The musicians’ styles, skills and inclinations have had time to ferment sinceThe Woods (2005), which was itself a departure from their earlier work. Tucker’s vocals retain little of their signature wail, although her voice sounds more nuanced and mature — a bittersweet eschewance of her riot grrrl roots. She is also sharing vocal duties with Brownstein, whose voice sounds more confident and powerful this time around. One such example is on the single “Bury Our Friends,” a track with a big, rhythmic riff and anthemic chorus (which is pretty much how the rest of the album can be described).

Ultimately, No Cities is not a comeback; it’s a reinvention, a continuation. It’s the sound of a new band exploiting all the benefits of a matured relationship between the players. So when I go see them at the Sound Academy on March 2, I almost wouldn’t be disappointed if they only play their new stuff. Okay I admit, that’s too hyperbolic, but only because the rest of the Sleater-Kinney catalogue is amazing. No Cities to Love stands on its own merits; it has already cemented itself as one of the mandatory listens of 2015.

RJ Vandrish (alias Rory Jade Grey) is a writer, artist and musician, having first written for Spill Magazine in 2010. They have also published articles for Daily Xtra and Shameless Magazine, and have written/staged two plays, Electric Sheep and Chimera. RJ’s most recently performed as a solo musical act and with the band I. M. Brown & The Transcendents.
RELATED ARTICLES
album reviewssleater-kinney
8.0