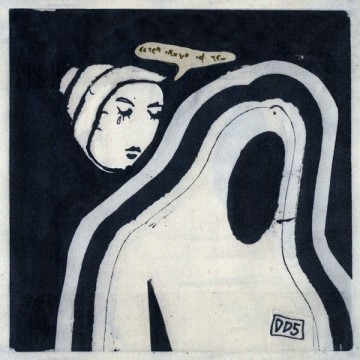 The test of a great album isn’t necessarily that it blows you away at first listen. The true mark of a timeless record is that it grows on you steadily and gets better the more you play it, a very wise fellow music fanatic (my dad actually) once told me. The Air Conditioned Nightmare, Doldrums’ latest work, is such an album.

As a collection of songs, Nightmare is a cohesive body, yet there is a wide variety of emotion and sound from track to track. The theme holding the album together is the struggle to live an authentic life despite societal dysfunction.
Many of the songs – particularly “Video Hostage,” “Funeral for Lightning,” “Blow Away,” “Industry City,” and “HOTFOOT” – deal with the threat of our imploding, soulless society, and Doldrums’ frontman Airick Woodhead’s response is to go deeper inside himself to escape it all. The lyrics on “HOTFOOT” sum this sentiment up: “I’m sleeping in in the age of unrest … If I cant pull myself back up, I’m gonna go deeper down into the mud.”

Some songs seem to draw inspiration from post-Kid A-era Radiohead, especially “Funeral For Lightning,” with its apocalyptic lyrics and distorted harmony vocals. The Doldrums’ style is uniquely their own, though – Woodhead’s inimitable high-strung voice paired with groovy beats and poetically dense lyrics are distinct.

While searching for these universal truths, the album tries to navigate the realms of humanity and relationships. On “Loops,” Woodhead laments how a relationship tends to come up against the same obstacles repeatedly, as though on a broken record. The song is made all the more interesting by being built on musical loops, making the song’s title self-reflective. In a similar vein, “Closer 2 U” is self-evident in its title: it aches to understand and inhabit the space of a lover, while expressing yearning for the love you haven’t yet experienced.

But amid all the seriousness, Woodhead knows how to have fun. On “My Friend Simjen” he is downright funny, professing his love for a computer program akin to ScarJo’s Samantha in the film HER (albeit without the sexy female voice) and then “dumping” it, saying that he has to “disconnect” because he has found someone new. Then on “We Awake,” he defiantly tries to have fun via his own imagination despite the apocalypse: “I heard a song the other morning. It said there would be no tomorrow/but we have each other here/I don’t care” and then later he adds: “Remember to sing/I’m ready to start again.” And finally at the song’s closing, as though to conclude: “Let’s have fun.”

Woodhead digs deep on this second album, and the fruits of his labour over the past few years working under the moniker of Doldrums are blooming. A good thing, because his label is SubPop, which was once home to a little band called Nirvana. Here he has the opportunity to try to appeal to the mass audience, but he stays weird – the mark of a true artist.