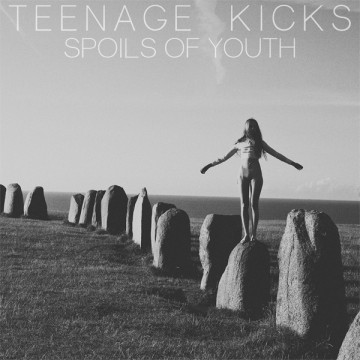 If I said that this is what I have been waiting for, I might not be very far from right.  Time will be the true judge of that, but for now I feel warmth inside of a void that I didn’t notice had become so large. The Toronto-based band Teenage Kicks, consisting of brothers Jeff and Peter van Helvoort, have just released their first full-length studio album entitled Spoils of Youth.

Since their inception in 2010, to say they have been busy from then on would be an understatement. After two consecutive self-produced EP’s as a five-piece act, Teenage Kicks had garnered enough cred to have Dan Weston, of City and Colour and Classified, do the mix for their third EP.  This, of course, set the stage for what would come next; a tactically peculiar move, yet one chalked full of raw, artistic integrity. During April of last year, an announcement declared that the now four-piece band would travel to Hollywood and have recording icon Alain Johannes take the reigns behind their debut album. Several months later, as those following closely will already know, Peter van Helvoort took the responsibility of recording and producing the album onto his own shoulders, while shedding two other band mates. This would be no easy weight to carry.

This album is the result of hours of relentless passion and hard work — and it shows. It’s quite a difficult task to describe the music that is the Spoils of Youth, as it felt so natural to experience. The van Helvoort brothers invoke a sense of comfort that I was sure had been lost from the rock music scene today. Like true artists at work, Jeff and Peter piece together, with a very raw beauty, exactly how it feels to grow up a little bit rough during the ‘80s and ‘90s, or indeed at any period in time; full of optimism, doubt and a love for all things adventurous. Spoils of Youth is reminiscent of tire swings and sundown campsite cookouts when you’re 12-years-old wearing an oversized sweater. At the same time, the album allows you to feel the pride and beauty in growing old; the passions found and lost, the bonds broken and made. A concoction only truly completed by an absolute, rock star attitude towards life in general. Seriously though, these dudes are tight. They really express a chapter of my life that I had almost forgotten about and with such artistic enthusiasm that I feel we grew up together. When I think back to all of my favourite classic albums and how they make me feel, I can certainly draw similarities both stylistically and emotionally. I think to myself how this could album could be part of my collection in 10 years. It’s refreshing to know that such artists are comfortable with themselves and have enough balls and integrity to push for more from their work. There will be much more from Teenage Kicks, this you can be sure of!

Fearless and well-traveled journalist with a penchant for the truth.
RELATED ARTICLES
album reviews
8.0