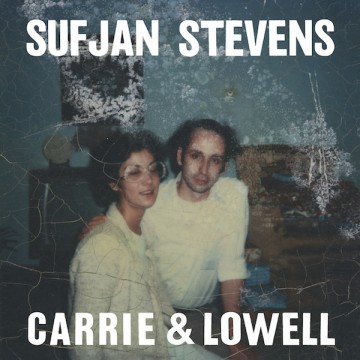 The entrancing sound of Sufjan Stevens’ unmistakable music is beautiful. The unpredictable yet cohesive sonic journey through his new album Carrie & Lowell will undoubtedly hold your attention from start to finish. The immaculately crafted album has a variety of production flavours from lo- to hi-fi and much in between; legend has it that one of the album’s tracks was recorded entirely on an iPhone in a hotel room while on tour. Carrie & Lowell would pair well with music by West Coast songstress Jessica Pratt or Bon Iver; its seductive melodies will suck you in and leave new audiences wondering where Stevens has been all their lives.

Since 2002’s Enjoy Your Rabbit, Stevens has risen to critical acclaim with his unique brand of trippy acoustic and banjo folk rock; his songwriting and overall artistry get seem to get stronger every album. Carrie & Lowell is his best collection of songs to date.

The opening track, “Death With Dignity,” is a technical masterpiece with perfectly executed mandolin and guitar finger-picking coupled with superb lead vocals and harmonies. The eerie soundscapes and trippy production value of this record will sink deep in your psyche and possibly give you a beautiful scare. In “Fourth of July,” Sufjan convincingly reminds us that “We’re all gonna die,” where those words are steeped deeply in bottomless caverns of unsettling reverbs and ghostly atmospheric sounds. “John my beloved” takes you on a childish journey reflecting on loneliness, sadness and slivers of fondness toward the assumed subject named John. It’s extremely hard to pick favourites here since ALL the material is so strong.

It’s safe to say that this release will be a serious force to be reckoned come awards time in 2015.

Andre has been writing for The Spill Magazine for over 12 years, dating back to the print days. His passion for music goes far beyond writing reviews for new music and live concerts, he is also an active musician and producer on the Canadian music scene. Having toured North America and Europe with various acts, he is no stranger to dedication and work ethic new bands must endure to make the grade in today's market; Andre always delivers perspective writing that is authentic and to the point. Mr. Skinner typically covers indie rock, grass roots, electronica and is our resident hard rock and heavy metal specialist. He is extremely selective on what bands he covers for articles and you can rest assured they are ALWAYS band to watch with something left of centre to offer.
RELATED ARTICLES
album reviewscarrie & lowellsufjan stevens
8.0