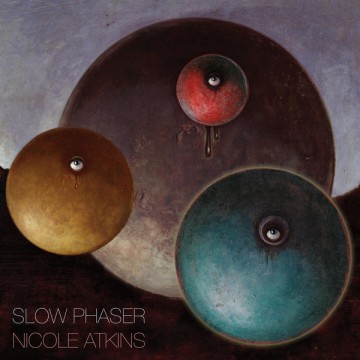 I have a half-baked theory that music occupies space in the world. The great music, the music that continuously rewards upon repeat listening and informs and deepens this crazy human existence of ours, occupies space. It becomes a tangible entity in the world, real matter comprised of particles and atoms and whatnot. Empty music, music that exists but does not change us, remains a vapid entity. It exists ephemerally for a brief moment and then departs.

Nicole Atkins’ music exploded in 2007 upon the release of her amazing full-length album Neptune City, a record that coined her self-proclaimed “pop-noir” sound. Listen to the track “Maybe Tonight” to get a taste of Atkins at the height of her powers. It’s a tremendously nostalgic track that recalls Loretta Lynn, Jenny Lewis and perhaps the pop vocals of the disco era (without all the extra disco ball hullabaloo). Her sound has undergone some renovation since then (as well as a couple of record labels and bandmates) exploring blues, ‘60s psychedelic and proggish rock. Her latest album, the crowd-funded Slow Phaser reflects these varied and eclectic tastes and tendencies with a more studied approach. Slow Phaser attempts to be permanent and weightless, pop and avant-garde, getting lost somewhere in the morass in between.

For better and worse, Slow Phaser feels like a record crafted with jukebox schizophrenia and accessibility in mind. The opening track, “Who Killed the Moonlight”, again recalls Loretta Lynn (her vocal style as it strays into her North Carolina roots will forever draw comparisons) but the musicality doesn’t deserve the complexity of her sultry, sexy, playful crooning. It ultimately underwhelms as it trends toward poptastic banality and confounding tempo shifts. The trend continues on “It’s Only Chemistry,” a saccharine sing-a-long that never really rises above the repetitive chorus. “Girl You Look Amazing” will surely find some crossover appeal through an immediately accessible and obsequious chorus – fans of the thematically related “Hey Girl” Ryan Gosling Internet meme will find much to like. But at the same time, Slow Phaser feels similarly like an Internet meme, a transient album without concrete matter.

Despite Atkins’ immense talent, Slow Phaser mucks about in various pop styles, crisp and weightless, without latching wholeheartedly onto the denser “noir” part that made Neptune City complex, relevant and occasionally intimidating. There are late-evening shadows of that early, raw and uncalculated brilliance on “We Wait Too Long,” and “Gasoline Bride,” songs that rise above the spit-polish. Here Atkins allows herself to cut loose, losing sight of the finely tuned, downscaled precision if only for a few too-fleeting moments. If there’s one song that represents the best of Atkins’ output on this album it might be “The Worst Hangover.” The boozy, blues guitar supports her voice and never placates with a saucy or repetitive hook.

Slow Phaser is an impossible record to dislike – Atkins’ bravado and originality could never be repressed – but it’s also a record that’s hard to wholly celebrate despite flourishes of greatness.