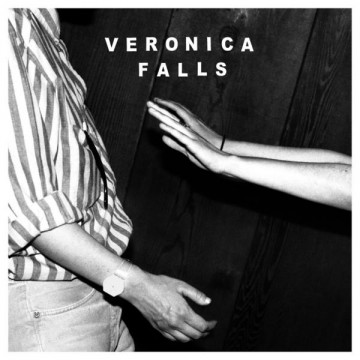 ronica Falls
Waiting For Something to Happen
Slumberland Records

On their second full-length release, U.K. Goth-poppers Veronica Falls stay true to their “aimless twenty-something” existence and belt out a melodic Indie-rock soundtrack to everyday life. Entertaining as it is, this latest effort may not be the band’s strongest…

Hailing from London, the four members of Veronica Falls come together to create a darker, more melodic version of today’s run-of-the-mill Indie-pop. To put it in a simpler perspective, the band could easily pass as the illegitimate love-child of Siouxsie Sioux and Brendan Canning. This being said though, Waiting For Something to Happen does somewhat fall short of the “what could have been” mark.

One would almost expect Veronica Falls to smash the current expectations of the Indie-pop world to pieces; throwing away the pre-conceived lyrics of hipster woe and really going deep, dare I say, medieval on the listener. Instead of songs about the band’s inner turmoil or real, heartfelt struggles through life though, tracks such as “Teenage” (“driving late at night, I’ll let you listen to the music you like”) would almost be as at home on a Dance/Club record as on this supposedly dark, Alternative offering. Such too is the case for “Everybody’s Changing,” feeling more so a high school penned warning of the social changes post-graduation than a track from a maturing Pop group easing into its creative groove.

As is the case with most arguments in life, there are two sides to this coin. Waiting For Something to Happen features amazingly tight and well orchestrated production courtesy of Rory Atwell (Male Bonding, The Vaccines). Also, the excellent harmonizing of Roxanne Clifford and James Hoare (both on guitar and vocals) has obviously been hammered into rigid precision over countless performances. Rounded out by the rhythm section of Marion Herbain on bass and Patrick Doyle behind the drum kit, Veronica Falls are more than capable of delivering the music that they’ve come together to create, urging the listener to seek out the band live.

For fans of Bauhaus and The Mission UK, Veronica Falls’ Waiting For Something to Happen does very definitely bridge a gap between contemporary Indie-pop and the end of ’80s Goth-rock. Though the at times “twenty-something” lyrical themes threaten to make this a one or two play record, Veronica Falls pick up the slack with their flawless production and excellent vocal melodies, ensuring the listener a great experience with each cycle of the album.