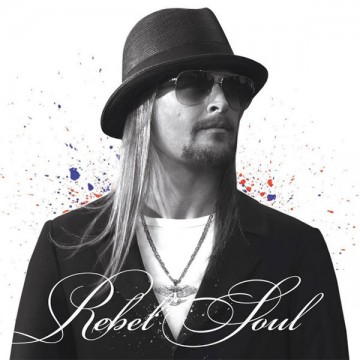 As an artist Kid Rock is a polarizing figure. He’s a Rapper and a Rock ‘n’ Roller, but this often dissatisfies fans of both genres. He does have a wide ranging, loyal following of NASCAR loving red necks, singing his praises, with their middle finger raised from one hand and a beer koozie in the other. But where is the truth in all this? Truth is often complex and hidden, but it always speaks through the music. Music must be listened to and cannot be a mere escape or distraction. Songs need to be heard and evaluated on their own merit.

Having lobotomized the brain, stripping it of all prior knowledge of the man behind the persona of Kid Rock, it was time to listen to Rebel Soul. Quickly one easily finds a really smooth and melodic Rock album. It is soulful and romantic but also raunchy, unapologetic and rebellious.

There are many great songs polarizing the senses. The title track, “Rebel Soul,” is a beautiful retrospective; a look back at Kid Rock’s life, and the highs and lows of stardom. “Cucci Galore” is fun and poignant; an unapologetic commentary on women who fling their bodies at Rock Stars and are shocked to be treated like a bug lodged between the rubber grooves of a shoe. Cucci Galore learns that she is nothing more than a nut searching squirrel, which inevitably gets scraped off the always grinding wheel of the tour bus.

“Catt Boogie” is the real treat and the hero of the record. It has that dirty, foot taping, hands waiving, Mississippi Blues feel. It’s the best song on the album. In a typical Blues fashion, it’s a commentary on the ugly living conditions in recent days and the sickening display of human greed. What makes this song even better is Herschel Boone, Jessica Wagner-Cowan, and Shannon Curfman. They bring a little taste of Doo-Wop to the recording, which is a nice treat.

The band that Kid Rock has gathered together for this album shows their depth of experience. This is perhaps why Rebel Soul feels so polished. Some may argue that this recording is missing that “Only God Knows Why” or “All Summer Long,” but this is precisely why this record’s worth a listen. There’s a great deal of harmony and maturity hidden in this recording. It really is about the music, and it is this soulful music that will ensure this record will be remembered for years to come.