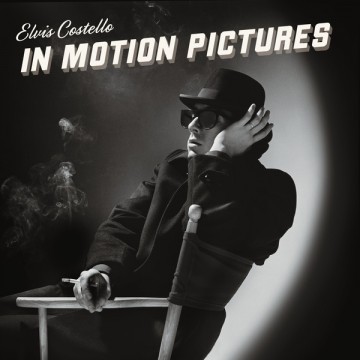 In Motion Pictures is a compilation of Elvis Costello songs that were featured in movies, and according to the press release, were “originally brokered and now hand-picked, with the sometimes reluctant and defiant blessing of Mr. Costello, by the mysterious Tinsel Town insider known as Moon Conway.”

The compilation stays true to the Hollywood spirit by being ill-conceived, derivative, and a complete waste of time and money.

While Costello’s songs and performances are used in movies such as Adaptation (2002), High Fidelity (2000), 200 Cigarettes (1999), and his exceptional Burt Bacharach cover in Austin Powers: The Spy Who Shagged Me (1999), these are omitted to save space for what is possibly Costello’s worst song, “Seven-Day Weekend” from the abysmal Club Paradise (1986). But the more I listened to this, it became obvious that this was a terrible idea from the start.

Costello’s best songs are difficult to place prominently in films because they are so cinematic on their own; the visuals would disrupt from the lyrics and vice-versa. Thus songs like “Allison,” “Shipbuilding,” “A Good Year For The Roses,” or “Watching The Detectives” are usually relegated to ambient volumes or dialogue heavy scenes.

As an Elvis Costello fan, this compilation looks like a blatant cash grab by the record label. While there are already many Costello compilations available, this is clearly the worst – so skip it. If you are however looking for a great introduction to Costello, your money is better spent on the double disc Girls, Girls Girls (1989) or The Right Spectacle (2005).

The Spill Magazine is a Toronto-based online publication dedicated to covering the independent music scene with a strong focus on our thriving hometown talent. Our writers bring you up-to-date news, in-depth features on musicians and reviews for the latest CD releases. We also travel to the front lines for all local festivals including Canadian Music Week and North by Northeast. Don’t forget to check out our Facebook and Twitter pages for all daily Spill updates.
RELATED ARTICLES
album reviewselvis costello
8.0