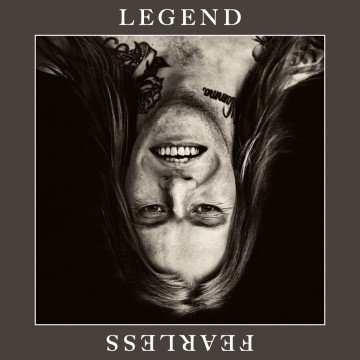 The album starts off with an excellent instrumental track called “Amazon War.” The atmosphere of the song is otherworldly. This is a true stand-out track and gets the album off to a good start. The song sounds as if it was created on another world at another time. There is something ancient yet modern about the complex dark soundscape. Ancient distorted chanting and powerful tribal rhythms among an Electronic musical background give this song real originality and character. This is a great intro.

As the album plays, the mood progresses from melodic Synth-pop on tracks such as “Violence” and “Fearless” and then back to an aggressive Electronic style with the track “Virgin.”

“Virgin” is a standout track, incorporating very heavy and skillfully programmed drums and synths and very powerful vocals. Another standout track is “Sister,” with its minimalist intro and progressively building energy, and unique vocal delivery.

Legend have produced a strong debut album which will appeal to many fans of Electronic music.

Spill Magazine writers strive to keep our readers up to date with news and events in the music industry. We keep you informed of the most recent information regarding new releases, tour dates, and information items about your favourite artists.
RELATED ARTICLES
album reviewsfearlesslegend
10