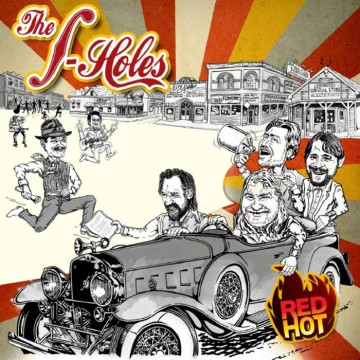 The first time I saw F Holes they were playing a Blues Festival in Kitchener, Ontario. I worked my way to the front during one of their Dixieland dance tunes amid shuffling 40-somethings, wild closet Punks and bewildered ball caps. By the time I made it to the stage they had slid into a cover of Tom Waits’ “Jockey Full of Bourbon,” a kind of Gulf of Mexico rumble. It was getting dark, the wind was everywhere, the upright bassin’ frontman screaming in the middle. It was one of the most badass things I had ever seen.

This October, they’ve come out with their third studio record, Red Hot, a record exclusively comprised of cover songs ranging from Tom Waits and Bob Dylan to Hank Williams and Super Mario. It’s an incredible showcase of their live talent and energy. It’s dance music for the modern disaffected toe-tapper. “They’re Red Hot,” an old Robert Johnson rehashing is about as full of piss as music gets without completely falling apart. It’s fast, aggressive and brief. You won’t be able to take it all in with one listen – but you won’t require my urging to listen to it again.

“16 Tons” is just about the angriest song on the record, mighty similar to the darker original material on the F Holes’ first two records. It’s a hard luck, thick-skinned Folk dirge sometimes credited to Merle Travis but with origins in ’30s depression era music. Nothing brings those terrifically brutal sob songs to life like a banjo and the F Holes’ iconic lead trumpet-playing hat.

As for Bob Dylan’s “You Ain’t Going Nowhere,” the F-Holes nail it. It’s not hard to do a decent cover of that tune. Plenty of bands have. As far as interpretations go, it’s Folk-Country’s answer to Leonard Cohen’s “Hallelujah.” The F-Holes don’t necessarily bring anything new to this particular tune other than not being Dylan or The Byrds. They just play it beautifully. It’s incredible how indistinguishable the album version is from their live performance.

This is a great record by the best band in Canadian Dixie, Swing, whatever. For those of us who are miffed by the airy-fairy Indie-pop direction “Folk” music has taken, or at least been renamed as by the Bon Ivers and Mumfords and Sons of late, Red Hot is a stark reminder of what music is still capable of being: Rollicking, electrifying, badass, and fun as hell.