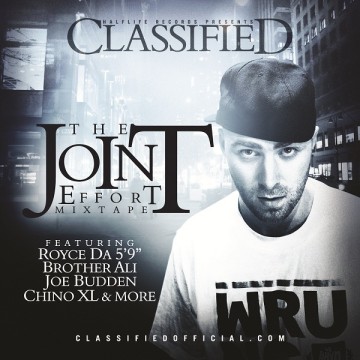 Classified is one of Canada’s most prominent East-Coast Hip-Hop artists, hailing from Nova Scotia and lending his unique take to the scene by way of interesting beats, lyrics and a larger-than-life personality. Recently he kicked off the start of the 2012 year by making a new music video, announcing a tour, and releasing the Joint Effort Mixtape, a collaboration-heavy compilation of some of Classified’s earlier work featuring guests like B.o.B., Joe Budden, Choclair, Moka Only and more.

This collection of tracks is less like a new album release and more like a collection of Classified’s favourite collaborations. With songs off his recent album, Handshakes and Middle Fingers (2011), such as “Unusual,” featuring Joe Budden, and “That Ain’t Classy” with Trash from The Liks, to cuts from his 2006 album Hitch Hikin’ Music like “Beatin’ It” featuring JRDN.

Though diehard fans may not feel the need to pick up an album comprised solely of work from past albums, it serves as a reminder of how far Classified has come, and how far he’s likely to go.

Alyson is a writer, content marketer and social media manager in Winnipeg, Manitoba. She holds a Bachelor of Arts in Rhetoric & Communications from the University of Winnipeg and runs her own business providing businesses and individuals with copyrighting services, and content marketing strategies and management. When not online she can be found gardening, riding her bike or sipping fancy coffee.
RELATED ARTICLES
album reviewsclassified
8.0