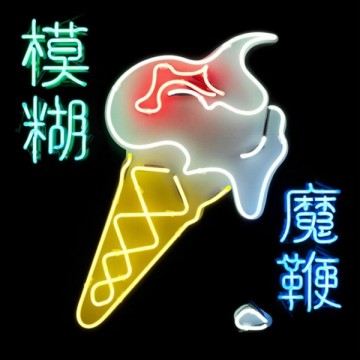 Twelve years after their last album and recorded in Kowloon, Hong Kong (which might explain the album cover), Blur is back with an album that well…..is basically a Blur record. The old Blur. No monster hit here like 1997’s “Song 2,” but it is great to hear Damon Albarn’s distinctive singing once again.

Blur was formed in London in 1988 and now consists of singer/keyboardist Damon Albarn, guitarist/singer Graham Coxon, bassist Alex James and drummer Dave Rowntree. Blur was part of the Cool Britannia Britpop movement in the 1990s, where groups such as Oasis, Pulp, Elastic, and Suede exploded into and dominated alternative radio stations and made headway into mainstream pop.

By the time 2005 arrived, the status of Blur was precarious. Coxon had left Blur a few years earlier and other members pursued other musical projects. It wasn’t until 2009 when Blur reunited for a concert in London’s Hyde Park to which very favourable reviews were received that Blur was on more solid footing.

Now over a decade later we have their studio work after some failed recording sessions and occasional touring over the past few years.

Magic Whip features songs with a variety of styles such as simple playful tunes like “Ice Cream Man” and “Ong Ong,” spaghetti western “Magic Whip” and a rockin’ “Lonesome Street.”

It’s nice to see the London boys back together again.

An educator who also tries to introduce others to great music. It's a never ending job.
RELATED ARTICLES
album reviewsblur
7.0