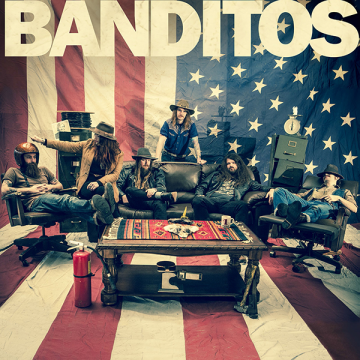 Banditos’ first ride is a good one!

Much heaping of praise is deserved for this 12-track album, as the raw wall of sound is centre stage for this high-flying, blues rockin’ Birmingham, Alabama sextet. Currently working out of Nashville, Banditos’ debut album brings a high energy, gritty sound with their alt country twang  / rock. With a lack of “in your face” subtlety, they kick your teeth in with wave after wave of nonstop honky tonk, southern country fancy. An impressive offering of tunes allows one to imagine they truly are inside a rowdy dive bar, listening to the jagged, fleshy tones of vocal wailing, slide guitars, banjos, and slamming piano keys.

Top notch tracks like “Waitin’” and “Golden Grease,” to the jazz-like “Ain’t It Hard” are gratifying earworms. You’ll fall in love with the variety of throwback track creations, as there’s nothing restrained about this album. There’s a lot to digest in regard to the use of instruments on these tracks, but it keeps one’s mind engaged and interested. The album goes full throttle from beginning to end, led by Mary Beth Richardson’s wailing (which hits its orgasmic peak during the slow-burning “No Good”) to Stephen Alan Pierce II’s playful banjo plucking. Corey Parsons isn’t left out as he follows through with his own distinct “rough around the edges” vocals throughout the album. Bassist Jeffery Daniel Vines and drummer Randy Wade complete the frisky sound with an efficient and spirited effort that doesn’t need to reinvent the wheel. The ferocious instruments rage with exciting banjo and Jeffrey David Salter’s guitar playing, adding layers and textures to enhance each track’s mood. The guitar and piano reach a phenomenal, dizzying pitch during “Cry Baby Cry” (not to be confused with The Beatles’ song), as the higher keys on the piano are will used for this track.

Banditos’ respect for country’s past shines through on their self-titled debut, as they take you down an all-out jammin’ road to hell and back, while smiling all the way. They even made time to sneak in some kazoo playing during “Long Gone, Anyway.” Enjoy the ride folks, as the overall arc of this album manages to make a bold statement and should not be missed by twang fans. Banditos gives you a taste of confident country music; these hearty songs will fill you up and make you want more.