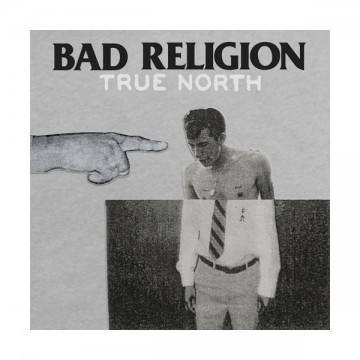 True North is the 16th studio album from Los Angeles’ Punk Rock veterans Bad Religion. Coupled with the fact that the band is now entering its 34th year of existence, one would assume that the band is starting to calm down and maybe stray away from their raucous Punk upbringings towards a more sedate, safer new sound. To take the band’s first single as an answer to this question, though, we’re left with a deep, resounding, Fuck You.

Bad Religion slams out of the gate with 16 tracks of pure, unhinged fury that show no signs of the cobwebs that sometimes trail other “aggressive” bands in their third decade. Halfway through the record though, as with most Bad Religion albums, the listener starts to realize that not only are these guys fast, pointed, and talented… they’ve also got a socially-conscious head on their shoulders.

Vocalist Greg Graffin (the band’s only constant member over the course of their existence) tackles issues on True North ranging from intellectual poverty to (surprise surprise) the impact of religion in our world today. Tracks like “Hello Cruel World” and “Robin Hood in Reverse” call out a domineering church with raw, powerful lyrics and seething guitar riffs courtesy of the band’s three (count ’em) three talented guitarists. Brian Baker, Greg Hetson, and Brett Gurewitz (Gurewitz also co-produced and mixed the album) fire out guitar licks that add the hard edge to Graffin’s melodic vocal offerings. With the rhythm section of Brooks Wackerman on drums and founding member Jay Bentley on bass, the band sounds just as unstoppable now as they did in ’85.

From the band’s Hardcore upbringing in the early ’80s to their present day “Godfathers of Punk” standing, Bad Religion have always been a force to be reckoned with. True North is no exception, and the band shows no signs of slowing down in their fourth decade of existence. This record is a must-have for diehard fans, new listeners, or any devotee of loud, fast Punk Rock who yearns for the snarl of the golden years of Hardcore.