SPILL BOOKS: THE BEATLES IN CANADA – THE ORIGINS OF BEATLEMANIA 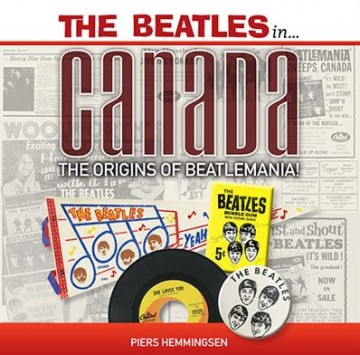 The Beatles in Canada – The Origins of Beatlemania

Canadian teens fell in love with The Beatles months before teens in the U.S. did. Here are the events, people and stories that led to Beatlemania in Canada during 1963 and 1964.

Author Piers Hemmingsen has spent many years researching his subject, and has conducted extensive first-hand interviews with the most important people who made it happen in the Canadian music industry from the late 1950s onwards.

This richly-illustrated book contains 444 pages. There are chapters on trans-Atlantic press coverage, the fan clubs, original Beatles advertising, record reviews and profiles of the key people and places that were involved in this uniquely Canadian story.

The book includes forewords by noted Beatles expert and British author Mark Lewisohn, and extensive contributions by Capitol of Canada’s Paul White – the A&R man who put his career on the line in early 1963 to issue the Beatles music in North America before anyone else

Thoroughly illustrated with original photos and artifacts, the author has had unique access to the archives of the key players in the history of the Beatles in Canada, and also to private collections of Canadian Beatles artifacts going back more than 50 years. But the best of the book lies in the stories of the young fans that in some wonderful cases brought Beatles records to Canada from England in the summer of 1963 and turned on their friends to these new sounds. This unique book and its approach will set a new benchmark for other Beatles history books. A must read for all of the Beatles history buffs out there.

The hard cover book, published in a limited run of just 200 copies, will be signed by author Piers Hemmingsen and Capitol Records of Canada A&R man in 1963, Paul White, who was responsible for getting The Beatles’ earliest singles released here in Canada a year before they appeared on the Ed Sullivan Show.

Both the limited edition hard cover book and the soft cover book will be accompanied by an exclusive poster and audio companion CD.

Piers Hemmingsen has followed The Beatles since he first saw them in England in early 1963. He holds an MBA from the University of Toronto. From the early 1970s he was a pioneer in the field of computing applications. He has published earlier highly respected/pioneering reference books about the Beatles recordings in Canada. His books have sold to Beatles fans around the world, and they have been acquired for music history library collections in Montreal, Ottawa and Toronto. “The Beatles’ Apple Corps. Ltd, and yes even a world famous Beatle,, have acquired his Beatles Canadian reference books. He has been a regular contributor to the British Beatles Fan Club Magazine and has provided articles over the years to Goldmine Magazine and Record Collector Magazine. He has provided detailed archival research on special project assignments for EMI Music Canada and Universal Music Canada. Over the years, Piers has met and interviewed many of the important Pop musicians and artists from the 1960s including members of some of his “fave rave” groups The Kinks, The Cream, The Jimi Hendrix Experience, The Four Seasons, Manfred Mann and others.

For more information go to thebeatlesincanada.com

The Spill Magazine is a Toronto-based online publication dedicated to covering the independent music scene with a strong focus on our thriving hometown talent. Our writers bring you up-to-date news, in-depth features on musicians and reviews for the latest CD releases. We also travel to the front lines for all local festivals including Canadian Music Week and North by Northeast. Don’t forget to check out our Facebook and Twitter pages for all daily Spill updates.
RELATED ARTICLES
booksthe beatles