Live Reviews
337
previous article
SPILL FEATURE: MOTHLIGHT - A BAND SHARES THEIR THOUGHTS ON THE MUSIC BUSINESS, CHANGES & HOW TO DEAL WITH THEM
next article
SPILL ALBUM REVIEW: PORT JUVEE - CRIMEWAVE 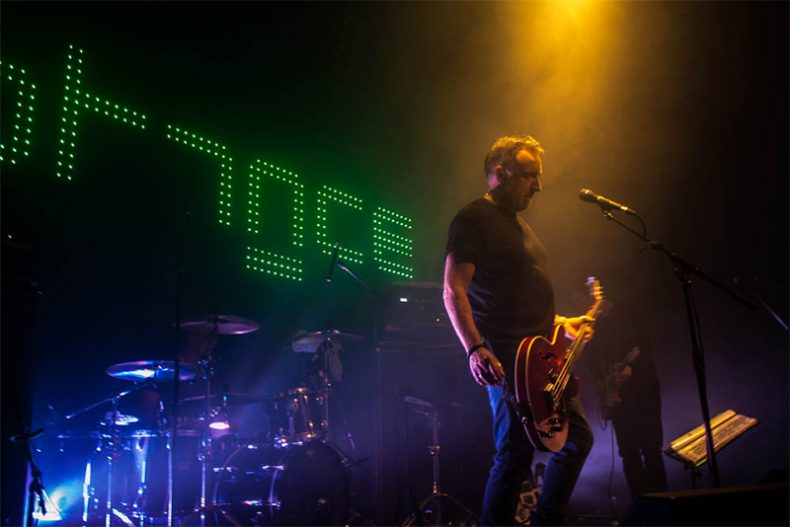 Performing selections from the New Order anthology Substance, Hook & the Light took to the stage. Guitarist David Potts, drummer Paul Kehoe, key player Andy Poole and bassist Jack Bates skillfully backed up Hooky’s stoic presence. With twin giant bass stacks situated on either side of the drum kit, the evening did not lack volume. Substance has no lack of songwriting merit; “Ceremony,”  “Everything’s Gone Green,” “Temptation” and “Blue Monday” elevated excitement in the crowd. The combination of such strong material in the intimate club felt unduly special.  Slick, ascending bass notes coloured melodies. Hooky occasionally played  electric drums on a sample pad, putting that special ‘80s touch on classic singles such as “ Bizarre Love Triangle” and “True Faith.” The hits demanded that the crowd sing along as Hook & the Light  rounded out a powerful 80 minute New Order set.

The audience would have likely been satisfied had the performance ended then and there. Hook’s direct, concise arrangements elegantly represent the endearing era of 1980s romantic songwriting and musical experimentation. New Order’s wake of influence may be fittingly compared to that of Joy Division; both groups have had vast influence on multiple generations of artists and musicians. A following set by such a worthy project felt like icing on the cake.

Originally revisited as a tribute to deceased band mate Ian Curtis in 2010, Hooky has continued to tour the world with his faithful, authentic renditions.  Joy Division’s post punk style creates a pounding, dreary atmosphere that contrasts New Order’s danceable beats. Although both projects share Hooky’s melodic, metallic bass melodies and a certain style of fatalism, their respective identities appear obvious.  The searing gain on the opening guitar of “No Love Lost” instantly pulled the audience in. Post punk classics like “Warsaw,” “Komakino” and “Transmission” lit up the dance floor of the brit-pop and post-punk adoring crowd. In the heated, feverish setting of a sold out club, the viscous, maddening lyricism and brooding bass on “She’s Lost Control” delivered an authentic, visceral experience. The audience felt compelled to sing along to the masterpieces “Dead Souls” and “Love Will Tear Us Apart.”

Playing for over two and a half hours with no lack of enthusiasm in an intimate, sold out club, Hook evidently loves to perform. Showing concern and respect for the audience, Hooky shared water with the crowd, dissuaded overly rough crowd behaviour and literally gave a fan the shirt off of his back. Reanimating two of the most iconic sonic styles of recent decades with both soul and proficiency, Peter Hook & the Light give fans more than their money’s worth.

The Spill Magazine is a Toronto-based online publication dedicated to covering the independent music scene with a strong focus on our thriving hometown talent. Our writers bring you up-to-date news, in-depth features on musicians and reviews for the latest CD releases. We also travel to the front lines for all local festivals including Canadian Music Week and North by Northeast. Don’t forget to check out our Facebook and Twitter pages for all daily Spill updates.
RELATED ARTICLES
joy divisionlive reviewnew order