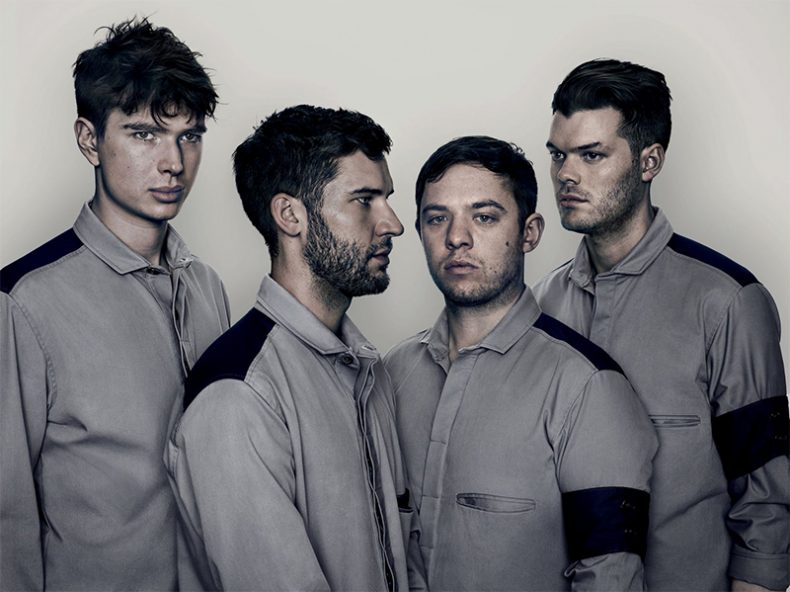 After a minor setback over confirmed press status, my photographer and I entered Mr. Smalls, a converted church in the Pittsburgh hamlet of Millvale, just after Everything Everything had taken the stage. Wires got crossed. The photo pass that was to be waiting for us at the box office had gone missing, lost in the channels of communication. So it goes.

“The lead singer might have been an extra from La Jetée,” my friend suggested, referring to Chris Marker’s post-nuclear time travel film that inspired 12 Monkeys. This seemed to be a far less clunky analogy than my own, which was “misrepresented Egyptians in a 1940’s Universal Mummy flick belonging to some cult devoted to the preservation/worship of a fictional rock deity from the future, perhaps the 1980’s, perhaps Max Headroom.” As I said, clunky.

Cloaked in what appeared to be a khaki cap-sleeved tunic (I’m without the knowledge to more adequately classify the type of garment) atop a standard issue black rock star t-shirt, Frontman Jonathan Higgs launched into one of his trademark falsettos. Without time to ease into the set, the pitched vocals forced us back into the moment rather than concerning ourselves with locating a perfectly incognito spot to snap photographs of the band – as we’d not completely managed to right the error that left us without proper press credentials. Higg’s vacillating falsetto, visceral and aurally demanding, causes immediate reaction. Complacency not allowed for the uninitiated.

Manchester’s Everything Everything blends multiple layers of complex orchestration into each song. Some have called it Math Rock or Glitch-Pop, and I might have agreed until absorbing this live performance firsthand. Production often masks a band’s sound; many artists do not truly reveal their most basic inspirations anywhere other than their live concert sets. The impressive guitar, lush musicality, jarring shifts in tempo and dense lyricism – this is prog. Prog-pop, perhaps, but progressive music nonetheless. Alt-rock, college-radio, electronic-tinged Dream Theater with a hook, you know, for the kids. Higgs counts Nirvana, The Beatles and Destiny’s Child as influences, and it’s precisely these widely varied influences that contribute to the jarring shifts and intermittently rewarding moments of juxtaposition.

The peak of these varied talents, mismatched at face value, occurred on “To The Blade,” their opening song and first track on their recent LP. When the band slowed the tempo in subsequent songs, infringing on the now thankfully distant oeuvre of 311, the energy evaporated. (I compare them favorably to 311, but the relationship remains, nevertheless.) I asked my photographer if he’d managed a few solid shots before being reprimanded by “the man,” and by “the man” I mean the large person in the black security t-shirt who’d crept up behind us just moments before and put the kibosh on our guerrilla journalism. He seemed skeptical of his gains, but then again he seems a bit of a maniacal perfectionist.

The band meanwhile launched into “Spring/Sun/Winter/Dread,” which spins an angst-less yarn about aging and mortality with that aforementioned alt-radio hook and lackadaisical island rhythms. The crowd burst to life during the song’s closing guitar crescendo from lead guitarist Alex Robertshaw. The band boasts talented individual musicians, even if it’s not clear that they’re sacrificing goats to the same rock deity. At different times during the evening I identified krautrock, late-era funk, post-punk and an occasional R&B refrain of which Silk might have approved. (Do you remember Silk? Well, you should. Look ‘em up.) Everything Everything goes out of its way to tiptoe around genre cliché or what is to be expected of a bunch of English dudes with rock instruments.

On “Cough Cough” (from their 2013 record Arc), Higgs’ rapped vocals clashed with the high school marching band snare cadence. I earmarked this in my notes as another example of the band’s taste for sonic discordance that borders on cacophony. Their live show takes on an entirely different brand of energy than the calculated production on the album. Reverb and echo overlaps the spaces in between. Their canned recordings aim for more clarity and precision. This was preferable.

When the set came to a close on the highly furbished “Distant Past,” an oppressively electronic track that clamors, nay begs, for radio attention, I’d heard enough to recognize that Everything Everything needs perhaps just a little less of everything. Maybe the band just needs one “Everything,” but then they’d be an early 00’s band that nobody remembers for anything but that song about hooch. (“Who go the hooch, baby / Who got the only sweetest thing in the world.”)

Yet there’s still an appeal to this kitchen-sink pop music that doesn’t adhere to any genre-defined rules of sonic construction. Everything Everything may not be for me… or even you, but the fact that artists dare to channel the discord of prog music on their way to Alt-rock radio means that envelopes are being pushed and earholes are being challenged with broader notions about what constitutes pop music in 2016. And that’s the piece of Everything Everything that I will always champion.

James David Patrick has a B.A. in film studies from Emory University, an M.F.A in Creative Writing from the University of Southern Maine, and an honorary Ph.D. in bullshitting about everything else from the College of Two Pints. His fiction and non-fiction has appeared in PANK, Monkeybicycle, Squalorly, Specter Lit, and Bartleby Snopes among other wordy magazines. While he does not like to brag (much), he has interviewed Tom Hanks and is pretty sure you haven't. He bl-gs about music, movies, and nostalgia at thirtyhertzrumble.com and runs the James Bond Social Media Project at thejamesbondsocialmediaproject.com. James lives in Pittsburgh, PA.
RELATED ARTICLES
live review