Festivals
1047
previous article
SPILL ALBUM REVIEW: THE ISLEY BROTHERS & SANTANA - POWER OF PEACE
next article
SPILL TRACK OF THE DAY: THE PLAGUE - "WILL YOU EVER KNOW ME" 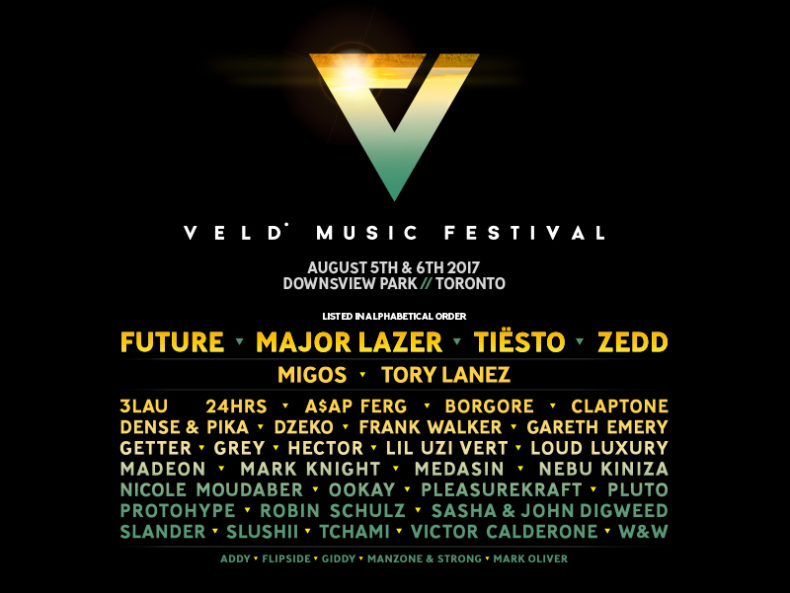 The grass of Downsview Park was ripped apart from festival goers as the annual Veld Music Festival was underway this weekend. The 2017 edition of the electronic music festival brought in DJs from many different genres, and even integrated more hip hop/rap acts to dominate the stages. This years headliners included Major Lazer, Future, Tiesto, Zedd, Tory Lanez and Migos.

The first day of the festival saw some rain showers right before gates opened, which unfortunately muddied up the field for the incoming crowd. Nonetheless, the audience poured in quickly for the first few acts. On the mainstage, Pluto gave a unique set filled with future bass, trap and some house music, while Grey and Dzeko followed after him with some pop and house fusion. The stage was massive, as it is every year, but the design was lacking and felt lazy. With the budget and audience that Veld consistently has, I feel like they could do much better to give their fans a much more grand experience.

The second stage (dubbed the Remy Martin stage) looked like it was straight out of Mad Max, with 3 post-apocalyptic cars spread across it and deep bass and loud sounds accompanying it. Medasin gave a standout set filled with trap and bass-house that readied the crowd for the heavier acts like Slander, Slushii and Borgore. Hip hop acts 24hrs, A$AP Ferg and Migos all gave stellar performances that hyped up the crowd more than I’ve ever seen. Seeing everyone react and sing along to Ferg’s “Dump Dump” and Migos’ “T-Shirt” was something I would not have expected to see at a predominately electronic music festival.

The Sony Xperia stage was a tent surrounded by cargo containers, haze and bright lights, with thumping techno and house tunes played by crowd favourites. The sound was nice and crisp, especially near the exit of the tent when the music seemed to echo to near perfection. Nicole Moudaber, Pleasurekraft and Sasha & John Digweed dominated the stage, but unfortunately, the crowd remained modest at best throughout the weekend.

Back at the mainstage, Madeon made waves with his eclectic electro house sound that had everyone on their toes. Following him, Zedd took the audience by storm with a flurry of different genres, and most importantly, his mainstream pop/house tunes that everyone sang along to. My only complaint about his set would be that it was very similar to previous performances he has put on, but he was still able to bring a party to the crowd. Closing the day was rapper Future, preforming songs from his newest ‘FUTURE’ and ‘HNDRXX’ records, and even some memorable tracks from his ‘DS2’ project. It was a surprising performance as he was able to show off his enthusiasm and energy with every track that played out.

The second day saw close to perfect weather, with a warm sun gleaming down and some cloudy breaks that let everyone cool off. Frank Walker, Loud Luxury and 3LAU all gave decent sets that were pretty generic for mainstage festival crowds, but the crowd seemed to enjoy them so there isn’t too much to complain about. Although, W&W seemed to be a huge down-point for me, as there  was little to no variation to their song selection. It felt like I was still in the 2014 big-room house craze.

At the Remy Martin stage, heavy hitter Protohype gave the audience a set filled with bass, dubstep and riddim that left the headbangers satisfied. Nebu Kiniza gave a short but sweet set right afterwards; a warm welcome for more hip hop to come later. Ookay and Getter gave two of the best sets of the weekend with genre-bending track selections and fast mixing that made the audience scream after almost every drop. Getter even made XXXTENTACION bearable as he dropped ‘YuNg BrAtZ’, forming a massive moshpit that collided on the beat drop. Lil Uzi Vert was sadly held up at the border, which forced him to cancel his performance that day and at Osheaga the day before. He was quickly replaced by French Montana who, surprisingly, gave a solid performance. A big step up from his previous set at Ever After Festival in June. The stage was closed off by Toronto rapper Tory Lanez, whose energy and stage presence kept the huge audience singing and moving for his entire set.

The last few hours at the mainstage was straight energy from beginning to end. Tchami gave the audience some deep and shallow house that kept everyone grooving and dancing. Tiesto’s first half was very solid as well but gradually dipped down as all of the big-room house began to make me go mad. He made up for it towards the end as he pleased the audience with his classics such as ‘Adagio for Strings’ and many more. Lastly, Major Lazer came out with a bang. Their performance felt like a crazy party, in the best way possible. Everything from the poppy dancehall music, the backup dancers with choreographed moves and twerking, and Diplo rolling around the crowd in a hamster ball all felt like rush of energy that was incomparable. Even though I didn’t think their song selection was amazing, you could tell that they were controlling the crowd down to every single kick drum and snare.

Overall, Veld was a grand experience that seems to be growing every year. With bigger lineups and more diverse acts, it seems like they are aiming for this festival to reach the heights of Lollapalooza and Osheaga, which I see no reason to complain about. I hope to see them expand in terms of venue space and possibly even stage designs, so we will have to wait and see where Ink decides to take this goliath of a festival in the near future.

Justin is a videographer, photographer and filmmaker from Niagara Falls, currently studying Film Studies at Ryerson University. With a passion for electronic music and the art of film, he combines the two together to bring the life of a concert and festival to your screen through visual mediums and live reviews.
RELATED ARTICLES
a$ap fergdownsview parkfestival