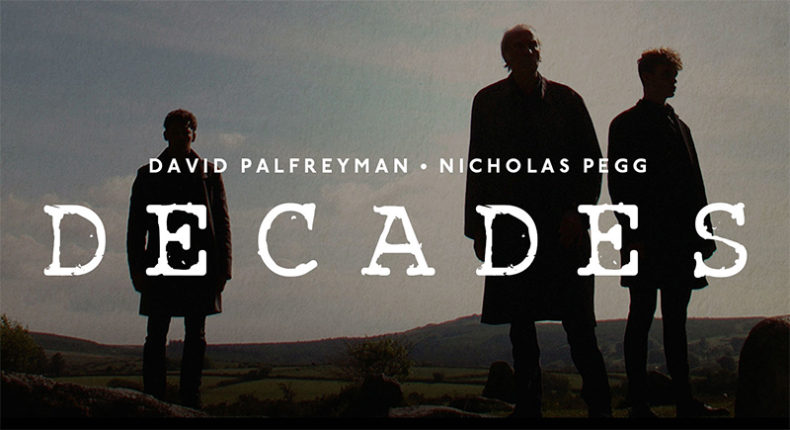 A CONVERSATION WITH NICHOLAS PEGG AND DAVID PALFREYMAN

The names Nicholas Pegg and David Palfreyman may not be instantly recognizable, but you do know their work.  Nicholas Pegg is a writer, director and actor, most notable for Dr. Who.  But, he has also worked with live theatre and television (The Eastenders and Doc Martin).  David Palfreyman is an actor, musician, poet and writer.  He has recorded under the name Malf (a fantastic debut album, RadioMagnetofon) and has published poetry anthologies.  The two came together and embarked on an incredible project called Decades.  I had the opportunity to catch up with these two busy artists as they prepare to launch Decades.

According to Nicholas Pegg, “David and I have known each other since we were teenagers, but this is the first time we’ve worked together on anything like this. Initially Dave got in touch and told me about his ideas for the album, and he sent me over a huge number of demos to listen to. These were only rough tryouts on guitar and voice at this stage, but as soon as I started listening to them, it was clear that this was going to be something special.”

The question then arises, how did this rather ambitious project come about?  There have been albums in the past, most of them rock operas or soundtracks.  Decades is a stand alone album  featuring many talented individuals.

According to David Palfreyman, “I had been kicking around an idea for a short story, and it occurred to me that by combining my songs with a storyline, and getting some actors involved too, I could fuse all these ideas together to create a ‘concept’ type album. To do this I needed a co-writer, and that’s when I invited Nick on board.  I think initially I had around 15 songs, which quickly went up to around 50! In the end, there were so many songs, and because I had written them, I asked Nick to choose which ones to go on the album – as I would have used all of them!”  Further some of the songs have been kicking around a while, Palfreyman continues, “ A couple of the songs on the album were written over 20 years ago, and I brought them into the mix as I thought they would fit well within the frame of the story. The rest of the songs were written specifically for this project.” 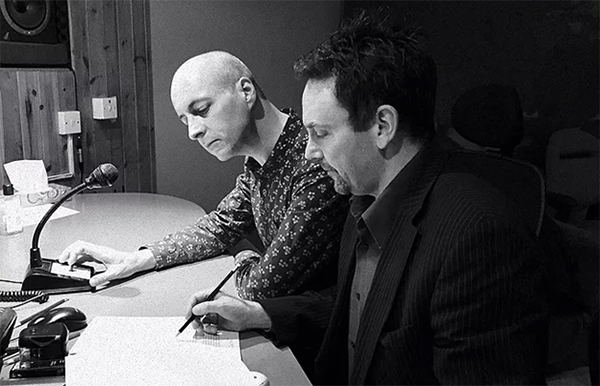 The cast for the record is astounding.  The artists are separated as there is the cast (voice actors) and musicians.  In both counts the line-up is quite brilliant.  David Warner (The Omen, Time Bandits), Richard Coyle (Coupling), Jacqueline Pearce (Plague of the Zombies), Jan Ravens (Splitting Image), Edward Holtom (Sherlock) and Simon Greenall (Trapped!).  In terms of music, musicians/artists featured include Sarah Jane Morris, Jessica Lee Morgan, Cassidy Janson, Beth Cannon, Ian Shaw, Mitch Benn, Eliza Skelton and Mr. Palfreyman himself.

According to Pegg, “I’ve known David Warner for some years, and I thought he’d be perfect for the lead role. I wrote that character with his voice in mind, so we were delighted when David said he’d like to do it. The same applied with Jacqueline Pearce. Richard Coyle is an old friend of David’s , so he was on board from an early stage. The other actors were people I’d worked with before, or else people whose work we admired and knew would be perfect for the parts.”

Palfreyman continues, “The singers and musicians came from far and wide. Some of them I had worked with before on previous projects. Others were suggested by Nick, and a lot of them were recommended by our brilliant co-producer, Ian Caple, who has worked with just about everybody.  For example, it was Ian who introduced us to Sarah Jane Morris.  What an artist!  Some of the people involved were friends, or friends of friends. Others were cast as you would cast a theatre play. Others were recommended, and some were chased after and caught!”

As mentioned, this form of an album is not new.  Concepts albums have been around since Frank Sinatra and Johnny Cash in the early 1960’s.  But, as mentioned, this is different.  This format helps tell the story which, according to Palfreyman, “is the soundtrack of the portrait of man who is writing about his life through the scrapbook of his mind.” 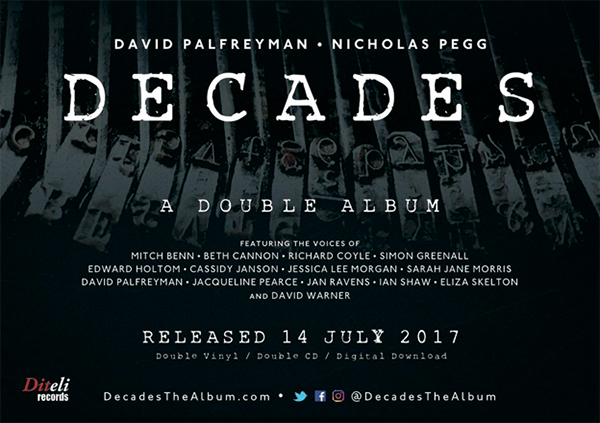 Given there are some classic concept albums/rock operas from the past, who and what were Pegg and Palfreyman influenced when they approached this project?  Not to compare, but to find out what motivated these two for this album.

For Pegg, his influences were a little surprising. “When I was writing the dialogue for Decades, I did spend some time thinking about other concept albums like The Wall and David Bowie’s 1.Outside, which is an album I love, just to ponder some of the different ways that they made use of the spoken word – but I don’t think there was ever any sense of them being huge influences on what we were actually creating. I think we can dare to say that this is our own thing.”

For Palfreyman, “ I don’t think I was particularly influenced by anything for Decades really – not consciously anyway. After releasing my debut album RadioMagnetofon with a very diverse set of songs, this just seemed to be the next step for me personally. Of course, subconsciously I was probably massively influenced by Jeff Wayne’s War of The Worlds, and possibly The Wall by Pink Floyd, but actually the latter is not an album I am particularly au fait with, so maybe not!”

The bottom line is, Decades is an original album and a brave one to put out in an age where downloads of individual songs seems to be the current fashion.  This album is available on CD, download/streaming and a beautiful double vinyl set.  This is an album that needs to be listened to straight through.  Each song works well on its own, but the music works best when taken as a whole.

Says Palfreyman, “: I would really like the album to draw people in, so that they can experience it on all levels and layers. I want people to draw their own conclusions about what it is.  Most importantly, I want people to hear something new on each listen. If that happens, then I will really feel like we have achieved something.”

Pegg adds, “That’s exactly what I was going to say. When we were writing Decades, both the songs and the scenes, Dave and I raked up all manner of detail that isn’t spelled out on the album. We know the full story – or rather, we know our version of it. But we want people to hear the album and join the dots for themselves, to fill in the gaps and bring their own imaginations to it. Also, I just want people to be transported by the music. I’ve always loved albums that have that transcendent quality, the kind of music that takes you beyond, to somewhere that is your own special place. Dave’s music on Decades certainly does that for me.”

Born and raised in Whitby, Aaron discovered music through his love of The Beatles. This led to a career in radio, writing for various publications, and ultimately a radio show about The Beatles (Beatles Universe), which ran for over four years. When not immersed in music, Aaron enjoys spending time with the loves of his life -- his wife Andrea, and daughters Emily and Linda (all of whom have an intense love of music too).
RELATED ARTICLES
david palfreymandecadesditeli records
9.0