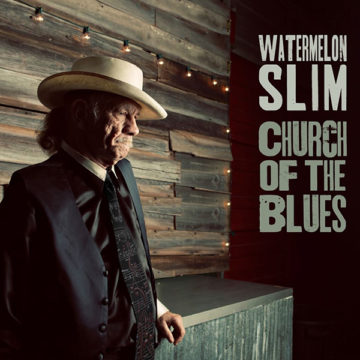 Watermelon Slim sings about a bevy of topics from taxes and technology to love and relationship troubles. In “Post-Modern Blues”, he addresses the problems of society, complaining that technology is “dumbing us down” and wondering if it is a government plan in the lines, “don’t use your mind/everyone keep your eyes glued to the screen”.

Aside from his insightful lyrics, the guitar stands out in all of his songs. There are amazing guitar solos in Church Of Blues, especially in “Mni Wicomi – The Water Song” and “Gypsy Woman”. This album feels like Watermelon Slim is completely in his element, and even though he is singing the blues, you will feel anything but blue when listening to him play.

Watermelon Slim and the talented artists featured on the album are seasoned musicians in every way. There is not one song I would call a weak link, so if you are a blues fan this album is a must-listen.