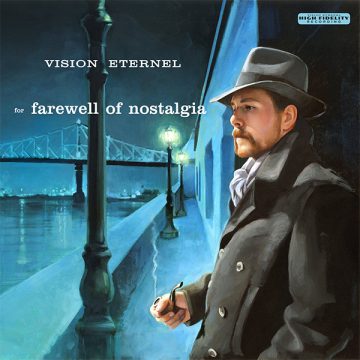 For Farewell Of Nostalgia is the latest release by Montréal’s Vision Eternel. A concept EP about, as he says, the emotional ”devastation of falling in love too quickly” and the heartbreak aftermath. Concept albums are difficult to do when one has lyrics and vocals, and band founder Alexander Julien manages the task with an entirely instrumental release.

The songs are broken down into segments, starting with “Moments Of Rain”, followed by the highlight of the release, “Moments of Absence”. This leads into “Moments of Intimacy” and finally the heartbreaking conclusion (and yes he accomplishes the heartbreak with his creative guitar work) “Moments Of Nostalgia”. It is a unique way to present the songs, and he succeeds in creating a cohesive, concept work.

Guitars and keyboards are the tools at hand, and in Julien’s hands they create beautiful, moody, pensive music. He describes his music as ‘melogaze’, which for him signifies a combination of styles, including ambient, space rock, shoegaze, post-rock, and emo. To my ears, this label is quite accurate in that he creates music that shifts easily from genre to genre.

The music is full of emotion and at times he builds the songs so that it sounds like organized noise as the conclusion. This is far from a criticism, in fact, what he does is create an almost sparse beginning to the song, and continually builds on the base.  The sound at the end helps in creating the chaos in one’s life. He does this so gradually, that one is aware of each layer being added until the end of the song. This is a great talent to be able to lull listeners into the music in such a way that one is almost unaware of what is going on within the confines of that particular song. This is something Eno is quite good at and established in early ambient records. Julien uses that model and takes it one step further.

This is a very dense, yet beautiful collection of songs telling of love found and lost. Sure, it is an old theme, but it is one that, in the right hands, can never get old. For Farewell Of Nostalgia is a wonderfully appropriate title for this collection of music.

Born and raised in Whitby, Aaron discovered music through his love of The Beatles. This led to a career in radio, writing for various publications, and ultimately a radio show about The Beatles (Beatles Universe), which ran for over four years. When not immersed in music, Aaron enjoys spending time with the loves of his life -- his wife Andrea, and daughters Emily and Linda (all of whom have an intense love of music too).
RELATED ARTICLES
album reviewalbum reviewsfor farewell of nostalgia
8.0