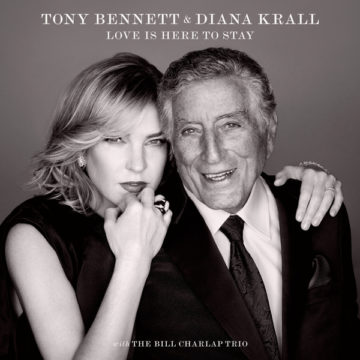 With a shared love of two of the 20th Century’s greatest songwriters — George and Ira Gershwin — two of jazz’s all time great vocalists, Tony Bennett and Diana Krall, get together and, backed by the Grammy Award-winning Bill Charlap Trio, present an understated master class in vocal delivery and phrasing.

Of the 12 “classic” jazz songs on the album, standouts include “S’Wonderful”, “Nice Work If You Can Get It”, “Love Is Here to Stay”, “I’ve Got A Crush On You”, and “They Can’t Take That Away From Me.” All of the songs sound as good as you’d expect from these two pros, and give one the feeling that they are performed in an intimate, small club-like atmosphere, not a cavernous recording studio. To be appreciated fully, the album would best be listened to late at night, by oneself, preferably with a Scotch on the rocks.

One can only marvel at the quality of Bennett’s voice at the age of 92, and the fact that he sounds as good now as he did in 1962 with his breakthrough hit “I Left My Heart In San Francisco,” and Krall is at her best on all the tracks including her one solo track “But Not For Me.” All of the 12 songs except two are duets, with Bennett’s solo vocal turn on the final cut “Who Cares?”

Also, of interest is the scat-like “Fascinating Rhythm,” which was Bennett’s first recording under his stage name of Joe Bari in 1949, but the track is now given new life with the vocal addition of Krall.

Gerry Young is President of Current Records and Management, and author of the 2011 biography Pop Goes The Weasel: Rock And Roll Off The Record, available at Indigo/Chapters, Barnes & Noble, and Amazon.com. He has recorded and managed Juno Award winning bands Martha And The Muffins and The Parachute Club among others.
RELATED ARTICLES
album reviewalbum reviewscolumbia records
7.0