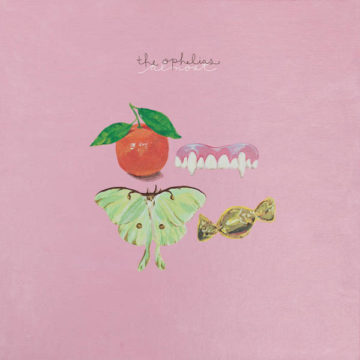 The Ophelia’s sophomore release, Almost, is an exquisite album that shows what real musicianship mixed with “writing about what you know” can do when a band gives all its members room to explore.

The Ophelias formed in 2015, and by all accounts including their own, are young. Their youthfulness emerges across Almost like a piece of bubble gum wistfully twirled around a finger, but it’s not meaninglessly saccharine twaddle that characterizes the album whatsoever. Rather, Almost stretches and twists each of its considerable elements to points where even flexible things might break, while miraculously avoiding that fate. Hailing from Cincinnati, Ohio, there may be something about growing up on the border between the Midwest and the South that makes the band so incredibly elastic, capable of composing fully articulated pieces out of disparate elements.

For such a young group, The Ophelias know their heritage. They announce their arrival as a girl group from the very first notes on the opener “Fog,” where a twee “bum-bum-bum-bum,” sets up the super compact 30 minutes that follow. In the 1960s Girl Groups like The Shirelles and The Ronettes sang songs that covered the concerns that plague teenaged girls/young women, from lost romances to teenaged pregnancy, belying the innocence their sound often suggested. The Ophelias (and their name) plays on that musical history, with a biting irony that can only come from a group comprised of members who weren’t yet born when Riot Grrl emerged nearly thirty years ago. The band’s origin story suggests as much: press about the group repeatedly points out that the four members started making music together not because of shared musical tastes but because they each were tired of being the “girl in the band” whose contributions were ignored or downplayed. On this side of Riot Grrl, which taught us to pay attention to and take girl culture seriously, and minus a Phil Spector to orchestrate a particular sound to fit a particular image of what music made by young women in their 20s should sound like, The Ophelias come up with something bold, polyvalent, and carefully self-assured.

There is a lot more order on Almost than naming your band after an infamous symbol of youthful sexuality and madness vis-à-vis Shakespeare would suggest. The reference is appropriate however to the band’s ethos and its arrangements. Each song on Almost seems like a stanza in a longer sonnet or sestina, with variations and repetitions appearing across the ten tracks. Music itself is of course about arranging repetitions of sounds in different ways, and the songs on this album turn what could easily be clichés into a really novel soundscape. If there is a formula to these artfully constructed pieces, dissonance-heavy “Zero” serves as the best example: like other songs on Almost it builds up layers of instrumentation, abruptly strips out several of the layers while simultaneously introducing the repetition of a lyric or chorus, and then gradually adds back in various sounds. Elements fade from one song into another seamlessly, so that the album is best listened to with crossfade enabled (“Fog” into “General Electric”, “Lover’s Creep” into “Night Signs”, “O Command” into “Lunar Rover”, for example); in other songs, like “Lover’s Creep,” The Ophelias summon Bjork or The Books and use found sounds to punctuate everything from staccato snare drums to triangles to violins.

That there is so much to listen to, in fact, might explain why half of the songs are under two-and-a-half minutes long. A couple, even, are under two minutes. As an exploration of continuity and repetition, versions of the multiple selves and relationships the band members inhabit play out, over, and against each other lyrically as well as musically. It will be interesting to see how the group develops in future albums, and indeed, one criticism of the album might be that populating a record with so many short pieces masks the fact that they’re not yet comfortable with expanding repetitive vignettes into longer pieces. What works for two minutes, in other words, might be boring in four.

Lyrically, as well, the songs are probably served well by their general brevity. As a listener who is definitely lyric-driven in my tastes, I was shocked at how secondary the lyrics were in the hierarchy of components I usually construct to judge an album. Most of Almost’s ten tracks use images that evoke sounds to describe love and childhood—moons, nighttime, light, reveries, electricity, sirens, birds, atmospheres, radio signals, communication methods that project but may or may not get picked up, memories from one moment lingering into the next—all of these sensations show rather than tell the stories of the characters who inhabit the album. It completely works in this instance. Once I’ve played the record a hundred more times, which I’m certain I will, I hope Almost’s lyrical cleverness will prove equally good to its musical achievements; in the meantime, it isn’t clear that they need to come forward any more than they do.

Almost is never anything other than what it is, unapologetically. The group knows what it wants to accomplish and has explored that, here, to fabulous effect.

Michelle Morgan is a queer ENFP living in New Haven CT, USofA. By day she works in digital accessibility. By night/weekend, she is an embroidery artist, DJ at 89.5fm WPKN, and purveyor of too muchness. She takes being a Gemini seriously.
RELATED ARTICLES
album reviewalbum reviews
7.0