SPILL ALBUM REVIEW: SLOTHRUST – EVERYONE ELSE 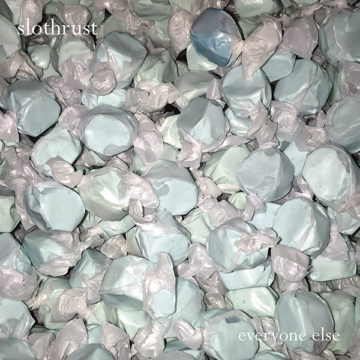 Slothrust
Everyone Else
Danger Bird Records

Everyone Else marks the latest release by LA/Brooklyn-based Slothrust. It is truly an awe-inspiring masterpiece that pulls the listener in within moments. Though the central album theme is the human experience, its distinguishing feature is the way singer Leah Wellbaum explores it using motifs of the natural ecosystem. The result is a captivating synthesis of personal stories littered with metaphors of floating and drowning, as well as similes bursting with under-water life. The lyrical delivery is sassy, piquant, and sometimes even absurd, leaving the listener either wonderstruck or confused.

While Slothrust is generally categorized as a garage rock group, the versatility of sound on Everyone Else is praiseworthy, covering metal, punk, jazz, and even a tinge of blues, while the vocals adapt accordingly. The opening track is an in-your-face instrumental that slays like a metal band, but keeps you eager to hear what’s next. In the single “Like a Child Hiding Behind a Tombstone”, Leah opens with a deadpan drawl that organically evolves from a seductive purr over light guitar into a grungy roar as she begins to shred. Her line from the opening verse, I think my face looks like glass / But my body feels plastic / Melt me into a bottle, resonates and leaves you hooked.

Horseshoe Crab was released as a single in August 2016 and is arguably the most noteworthy track. It deals with internal dissociation and living in various worlds simultaneously. The standout lines, I don’t have anything in common with myself / except that I came from the sea / like everyone else did, is a testament to life’s disorientations and also gives the album its name. The track starts slow and jazzy and builds to strong guitar strums as the vocals rise from conversational to a colorful howl.

The record’s darker side emerges in The Last Time I Saw My Horse; a slow, jazz-infused track abound with metaphors of vomiting bones onto the sea and being frozen under water. The song closes with a 1-minute rock instrumental while the lyrics sink in.

The most underrated track on the album is Mud; its gloomy and acoustic opening builds up to a punky and passionate guitar riff. The vocals are saturated with nature motifs and, halfway through, a spooky circus-like instrumental begins and takes the listener on a ride to the end, expressing the true mosaic of sounds, rhythms, and experimentation that the band is capable of.

The album ends with the Pigpen, a somewhat dark and deadpan track, yet it is simultaneously upbeat. It features nimbly plucked and quiet riffs interspersed with careful blues interludes. Wellbaum opens with: You’ve got an open mouth / and I’ve got an open wound, before asking you twice to suck the poison out. The awesome imagery yet intimate feel is an outstanding display of this group’s intelligence and raw musicianship.

The album ends on an upbeat tick – a flash of optimism at the resolution of a somewhat dark record. Overall, Everyone Else paints an artistically dark and honest picture of the world, blending deep lyricism with the best of rock, jazz, and blues. Each song has its own personality that will undoubtedly resonate with the virgin listener or long-time fan.

SPILL ALBUM REVIEW: SLOTHRUST – EVERYONE ELSE

The Spill Magazine is a Toronto-based online publication dedicated to covering the independent music scene with a strong focus on our thriving hometown talent. Our writers bring you up-to-date news, in-depth features on musicians and reviews for the latest CD releases. We also travel to the front lines for all local festivals including Canadian Music Week and North by Northeast. Don’t forget to check out our Facebook and Twitter pages for all daily Spill updates.
RELATED ARTICLES
album reviewshorseshoe crabslothrust
8.0