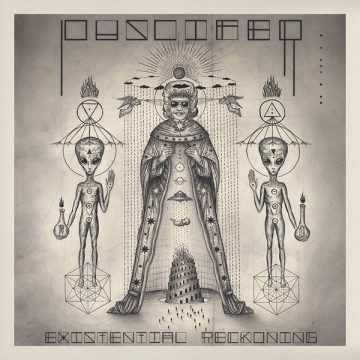 Maynard James Keenan, a name synonymous with otherworldly experimental music, is back with his personal playground project Puscifer and their fourth studio album Existential Reckoning. Described as akin to being abducted by aliens, this album is a drifting and floating experience that will take you on a journey. Your mileage may vary depending on how you choose to experience this album – it is both soothing as background music but also a deep dive into the beyond if you decide to soul search into the lyrics.

As frontman of Tool and A Perfect Circle, Puscifer has always been Keenan’s pet project, a space for his creativity to run free. Joining him again for this album are Matt Mitchell on guitar and Carina Round on vocals among others. Along the line of former Puscifer albums, Existential Reckoning is a collection of trippy electro-artsy rock tunes. And as with past Puscifer albums, the lyrics seem to continue the journey of Billy D and his wife Hildy Berger, characters who were introduced in Puscifer’s second album Conditions of My Parole. Aptly enough, in the narrative, Hildy Berger was a victim of an alien abduction.

Existential Reckoning is the music you want playing on a long drive, it’s also the music you want playing while you work or while you sleep, but get ready for some bizarre dreams if you do. Like most of Keenan’s work, lyrically this album travels some deep territory here from explorations of the human psyche to interstellar travel. “Grey Area” alludes to the human relationship with artificial and synthetic intelligence as rooted in the binary construct.

“Bullet Train to Iowa” is not merely about a trip to the Hawkeye State but rather a lightning-fast trip on Iowaska – or Ayahuasca – a tea known for its mind-altering properties that is said to separate the soul from its body. “Personal Prometheus” is a nod to the Titan in Greek mythology, the supreme trickster and god of fire. In the context of this song, this is a tale of burning away human ties and ascending into the beyond.

Existential Reckoning is a magical and enigmatic album that may seem unassuming at first but if you let it, it will take you on a journey and back again. Get ready for a ride.

Samantha is both a writer and a fan of the arts and has been able to find numerous ways to pair the two. Eager to dive head first into writing for Spill, Samantha is an avid partaker and reviewer of live art in Toronto serving as an editor at Mooney on Theatre exploring live local theatre, she's a photojournalist for Been Here Done That, a travel, dining and tourism blog that focuses on Toronto and abroad and previously for Lithium Magazine. She's passionate about music, theatre, photography, writing -- not necessarily in that order. She drinks tea more than coffee, prefer ciders over beers, and sings karaoke way too loudly. You can follow her on various social media including Facebook, Twitter, and Instagram.
RELATED ARTICLES
a perfect circlealbum reviewalbum reviews

by Samantha Wu on October 30, 2020
PUSCIFER EXISTENTIAL RECKONING: LIVE AT ARCOSANTI (AZ) OCTOBER 30, 2020 Maynard James Keenan, the mastermind behind Tool and A Perfect Circle, is back with his [...]
6.0