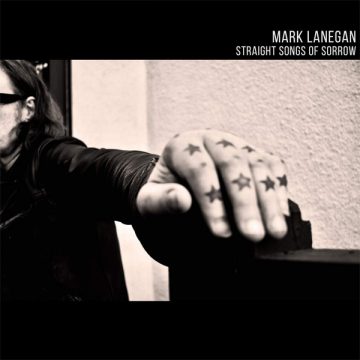 While seemingly keeping a low profile over the last decade, Mark Lanegan, of Screaming Trees, Queens Of The Stone Age, and countless other collaborative works, has simply refused to slow down. Releasing more solo albums in the last 10 years than any other period in his career, Lanegan’s latest record, Straight Songs Of Sorrow, is a creative and experimental collection, consisting of 15 songs, that serves as a companion to his recently released autobiography, Sing Backwards And Weep.

Opening with the electronically-driven “I Wouldn’t Want To Say”, it is clear that Straight Songs Of Sorrow is a departure from expectations one would have given Lanegan’s previous work. That being said, the combination of Lanegan’s gruff, raspy, and raw vocals with the electronic textures feels connected with alternative legends the likes of Perry Farrell, Richard Patrick, and Scott Weiland. “I Wouldn’t Say” is followed by “Apples From A Tree”, a stark track featuring simply Lanegan’s lyrical narrative and a a folky finger picking on a crisp acoustic guitar. The juxtaposition between just the first two songs is shocking, and while it makes for a slightly less cohesive feeling album, it sets the tone for Lanegan’s experimental songwriting to go forth without boundaries on Straight Songs Of Sorrow.

As the album continues, the contrast continues to build with a number of acoustic and electronic tracks. While this makes for an interesting listening experience, Lanegan is at his best during the more stripped-down moments on Straight Songs Of Sorrow. The sludgy anger of “Ketamine” in all its simplicity is fantastically dark and, at times, truly menacing. “Churchbells, Ghosts” is similarly haunting and surprisingly jazzy thanks to the light piano accenting Lanegan’s vocal melody while “Ballad Of A Dying Rover” is a lament of regret for the past and acceptance of the present. On top of these, “At Zero Below” with its chilling and cinematic strings, “Burying Ground”, and the Bowie-inspired “Eden Lost And Found” stand out as excellently written songs.

All in all, Straight Songs Of Sorrow makes for a solid addition to Lanegan’s massive creative output. There is a level of vulnerability, intimacy, and raw, unabashed humanity that give Lanegan’s lyrics a sense of reality along with some soul. Free of riffs, distortion, and largely beats, Straight Songs Of Sorrow has an abundance of integrity which takes the central role among the 15 tracks. It is because of this that Lanegan’s songwriting shines through in a deep range of human emotions.

A passion for music has always been a part of Gerrod’s life. As a young boy, he was raised on a steady diet of the music from The Chili Peppers, Aerosmith, The Stones, Prince, and others from his mum. Raised in the GTA, Gerrod continued to foster his love for music by attending a wide range of concerts and learning the drums. His unapologetic passion for music has no bounds and has spread to a wide variety of styles, whether it be the 90’s rock that sound tracked his teenage years, the jazz he studied in university, or his newfound love for hip-hop. He recently received his bachelors in music and education from York University and is passionate about writing and reviewing good (and less than good) music. Gerrod is also the drummer and songwriter for a Toronto based rock & roll band, One In The Chamber.
RELATED ARTICLES
album reviewalbum reviewsheavenly recordings
9.0