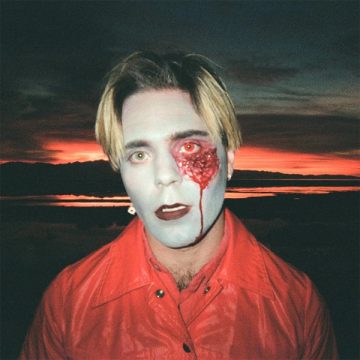 Gathering Swans is Choir Boy’s second album following Passive with Desire, where the world got a chance to find out just how talented Adam Klopp and his distinct voice really are. Klopp could be the second wave of Kate Bush, mixed with Liz Frasier.

On the new record, the other band members shine as always, specifically Chaz Costello’s bass playing. It is a grounding force in every song presenting not just a foundation but also a driving force.  Both Klopp and Costello are in another amazing electronic/goth band Human Leather.

The new record kicks with “It’s Over”. It begins in typical Choir Boy atmospheric fashion but then the new pop sound takes over, which not only accents the song but lifts it up.

“Toxic Eye” which has horns and layered vocals, sounds so good and again is very uplifting. Klopp’s vocals are overdubbed on this album, and his tone has so much range it’s all otherworldly.

Major standout on the album, “Complainer”, is guitar-wise Johnny Marr 2.0, but with all of the other Choir Boy esthetics going on, it really meshes. It is a standout track and could be a single of the year type of song. Its theme, making fun of the sad songs that they themselves are experts of while at the same time using Smiths’ chord progressions, is brilliant.

These songs as a whole are not as heavy as the Passive With Desire record feel- wise, and I think that is the point. It would be hard to revisit the horrors of sadness on that album, even though it was ground-breaking and stands on its own. Lastly, “Eat the Frog” is a pop masterpiece and another step in the right direction musically for Choir Boy.

To me this is the album of the year so far. It is uncompromising, beautiful, punk, gothic, angelic, and just plain refreshing.

Ex-pat living in Geneva, Switzerland from the hard streets of Baltimore, Maryland. Ex-radio-monkey and avid listener of all things that are supposed to be cool.
RELATED ARTICLES
album reviewalbum reviewscomplainer
7.0