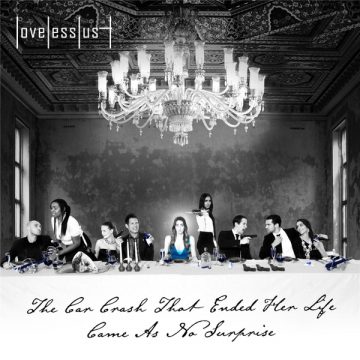 Having recorded 44 demos over the span of eight years, Lovelesslust’s The Car Crash That Ended Her Life Came As No Surprise is as mature as a debut LP can get. The degree of thought and effort put into every note, every lyric, every nuance, makes this record an undeniably cerebral experience.

Among a very long list of boring, sentimental, and obscure album titles, The Car Crash That Ended Her Life Came As No Surprise is a condescending headline that immediately grabs just enough attention to crack the near-impossible code that leads one to check out an album by a band of which they know nothing about, in a genre they know little of and care little for.

I was far from disappointed.

Dubbed as Industrial Art Rock, this record is musically intricate but not pretentious, rhythmic yet not repetitive. The sheer range and contrast of sound and use of space keeps you engaged without trying too hard. On one end you have tracks like “You Say Life is Long,” which feels like a Jack Dishel / Regina Spektor duet fed through an electronic filter; on the other end is “Lowlife Novelties,” an instant reminder of vintage Sega Genesis soundtracks (think the industrial stages of Sonic the Hedgehog – am I right?)

But for me personally, the nonstop lyrical hooks are what make this a winning album. “Stale” beautifully muses a can’t-win-for-losing mind with, “I’m hated for helping, murdered for minding my own. I’ve got all the love and yet not;” “Pill” illustrates hopeless surrender by bouncing between “I take a pill, I don’t feel” and “Don’t have what it takes to make it”; while the anthemic lead single “AntiYouth” bitterly repeats, “My lungs hurt, my headaches do not go away.”

Overall, the sense of deeply deliberate expression and masterful delivery provided on this record are as noticeable on the 10th listen as on the first. I’d recommend any proclaimed music lover and tastemaker to give it a shot, especially if it’s not within your typical comfort zone.