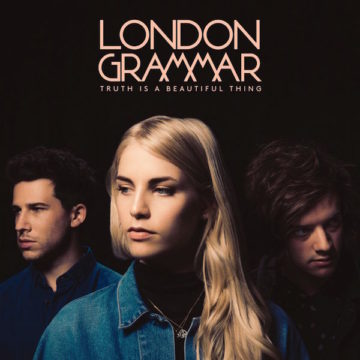 British pop-trio London Grammar isn’t your mainstream, radio band. Their songs often span five and six minutes, featuring shorter verse lyrics and longer melodies. On Truth is a Beautiful Thing, the band excels when they focus around their centerpiece, Hannah Reid. The 27-year old singer-songwriter is the backbone of London Grammar, her piercing vocals setting the tone for each and every song. On this album, this is most apparent when the piano and guitar supplied by Dan Rothman and Dominic Major serve as a perfectly complimentary backdrop to mostly soprano vocals.

The album opens with “Rooting for You,” a dark, brooding track in which Reid admits that she’s scared to only be with one person and rather than hate them, she’s only wishing them the best. Two standout tracks, “Big Picture” and “Hell to the Liars”, are split up into two distinct parts. The first three minutes or so are carried by the aforementioned guitar and piano while Reid belts about relationship despair. But perhaps the most startling and gorgeous parts barely feature vocals, just simple humming on one and very brief vocals on another. In an age where three-minute pop songs filled with vocals and synths are all the rage, London Grammar’s best moments are the most simplistic, especially when the guitar, piano and violin all work in perfect harmony on “Hell to the Liars”.

Fellow British pop sensation Florence Welch is channeled on “Oh Woman Oh Man”, a relatively upbeat song where Reid wants her man to understand the magnitude of their relationship to her, a concept that he appears to be taking rather lightly. I personally love the imagery of “Choose a path for a child/Great mirrored plans/Oh woman oh man/Take a devil by the hands through/Yellow sands”, conveying the hardships of life by using a man, a woman, a child and a devil. Not bad for a chorus.

The second half of the album continues the theme of relationship ballads, with “Everyone Else” providing Reid the opportunity to vent about how everyone else around her knows that her current relationship was a waste, and some particularly traumatic events caused her pain. “Non Believer” is the only time we see auto-tune, and it stands on its own in the bridge and chorus in the last minute of the song through a beautiful harmony before the piano-led melody jumps back in. “Bones of Ribbon” is the favorite track for both Reid and Rothman on this album, but falls short for a band that makes such a conscious effort to allow vocals to stand predominantly on their own. The percussion actually overpowers the bass, piano and vocals for large stretches of the song, but when the piano and guitar do get a chance to shine through, the result is absolutely stunning.

Most albums attempt to create two or three singles that hopefully turn into hits, a few other notable sing-alongs and mostly solid tracks in an 11 to 13 song album. Truth is a Beautiful Thing pays no attention to the formula, instead producing 11 chill-inducing songs that are best heard with your eyes closed in the dark. Reid stars throughout, her vocals having the ability to elevate a song with different melodies and varied amounts of percussion. The somber nature of the entire album makes it a difficult listen from one end to another, especially with some of the tracks reaching six minutes in length and a few duds at the back end. Title track “Truth is a Beautiful Thing” feels like the perfect bookend, especially in a world where truth has become increasingly more difficult to find. Overall, the innovative nature, spectacular classical-like arrangements and shattering vocals make this record well worth a few listens.

Josh Stern is a financial analyst living in New York. He recently graduated from the University of Michigan, where he studied User Experience and Data Analysis while writing for various publications. He loves watching sports and attending concerts, and is always on the lookout for the next great Alternative/Indie band.
RELATED ARTICLES
album reviewslondon grammarrooting for you
9.0