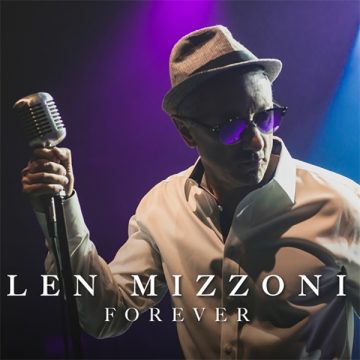 The first thing you will notice when Forever kicks off, is just how much Len Mizzoni continues to grow with each release. Forever is extremely well-produced pop music. The sound of an accomplished artist, who is not afraid to combine genres, comes pouring through the speakers. This is well-arranged and performed music that rolls jazz, pop, and rhythm and blues all together.

Forever is Mizzoni’s third solo album and follows closely on the heels of 2019’s Better Days. This is not an artist who stops creating. On Forever, Mizzoni easily incorporates many styles and seems to have moved into whole new areas. Forever demonstrates Mizzoni’s continued desire to move into areas and develop as a writer, musician, and singer.

The songs are instantly likeable and accessible. Many of the songs could easily be singles. “Dangerous” has a great groove and could be remixed for club and dance play, while “Let me Love You” is a stunningly beautiful ballad. Both, given radio play, would be hits. But the same could be said for most of the album. Mizzoni writes remarkably melodic songs.

Lyrically, this is a deeply personal album full of love songs, but also personal reflections. Take a listen to “Sometimes”, a beautiful, self-confessional song. It is a highlight of the album, and Mizzoni sings the songs beautifully. At times he brings to mind Peter Gabriel, but overall, the vocals are clearly his own.

One time member of Frozen Ghost, Mizzoni has come a long way since that band and is embarking on his own. Forever is a great album full of memorable songs. Mizzoni has learned his craft well, as a musician, a writer, as well as a producer as he produced the album himself. My only complaint is that this album cries out for vinyl. Small criticism, however, because this album is a treat and demands repeated plays.

Born and raised in Whitby, Aaron discovered music through his love of The Beatles. This led to a career in radio, writing for various publications, and ultimately a radio show about The Beatles (Beatles Universe), which ran for over four years. When not immersed in music, Aaron enjoys spending time with the loves of his life -- his wife Andrea, and daughters Emily and Linda (all of whom have an intense love of music too).
RELATED ARTICLES
album reviewalbum reviewsbetter days
9.0