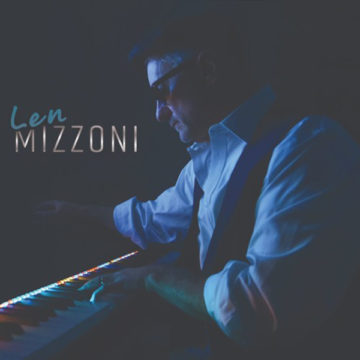 Better Days is Len Mizzoni’s second full-length solo album. The first thing that strikes the listener is the confidence he exudes both in the songwriting and the performance. On Better Days, he adds more experimental sounds, music, and lyrics to his unique brand of jazz/pop, making it a stronger album than his debut, Waves of Indigo.

The album kicks off with the wonderfully catchy “Better Days”, a tip of the hat to the 1980s. With Mizzoni’s voice complemented by some incredible instrumentation, the song soars and takes the listener along for the ride. It is a wonderful introduction to the album, as he presents a very optimistic view, hoping for “better days”. The rest of the album follows a similar path, with a fair amount of reflection (“Take Me to Graceland”), while also looking forward.

There are also some playful moments. For example, “Love You Emoji” is a lovely song and full of charm. He then shifts the mood with the somewhat darker “Gotta Get Started”.  Meanwhile, “All I Need” demonstrates Mizzoni’s ability to write a melodic dance song which demands some remixes.

The diversity contributes to the album’s beauty, mainly because Mizzoni is able to pull it off. The lyrics are full of reflections about his relationships and the past, which fit well with the music he chooses to accompany the words.

This album is less jazz and more pop. His roots in 1980s synth-pop and his own musical history are obvious, but this is not a criticism. Mizzoni references his influences while creating a whole new sound for himself. He has expanded his musical lexicon with Better Days, and it is always exciting to see an artist grow and develop, even one who has been around for a while. Better Days is a brilliant pop album, well-constructed and well-played, full of great songs and diverse sounds. It never gets repetitive or boring. If anything, he keeps the listener engaged.

Born and raised in Whitby, Aaron discovered music through his love of The Beatles. This led to a career in radio, writing for various publications, and ultimately a radio show about The Beatles (Beatles Universe), which ran for over four years. When not immersed in music, Aaron enjoys spending time with the loves of his life -- his wife Andrea, and daughters Emily and Linda (all of whom have an intense love of music too).
RELATED ARTICLES
album reviewalbum reviewsbetter days
9.0