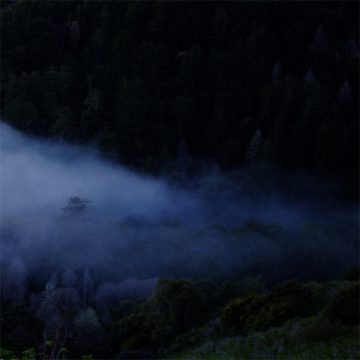 Jonas Bonnetta  of Evening Hymns, and violinist Edwin Huizinga of The Wooden Sky, wrote Dark Watchers in seclusion in Big Sur, in January 2018. Not sure why it took so long to reach record shops, but I am only happy it did. This is a rare treat in music, a spacious, moving, strong, experimental instrumental album.

While it is unusual for an instrumental album to be influenced by poetry, it makes sense with this album. The music is very much a landscape. The sounds and arrangements take you into another place, full of nature. And in many ways, the music becomes very cinematic.

The music ranges from downright experimental, such as the opening track “Glen Deven Ranch # 3” which moves from a simple piano into a cacophony of sound, to stirring, melodic beautiful melodies such as “Carlos Kills The Goat”. This is one cohesive album. At no time does the album become boring or difficult. What the album does do,  is to allow one’s mind to wander. Huizinga’s violin weaves in and out over Bonnetta’s instrumentation. Sometimes overpowering the bass track, but again, it is planned and it all comes together.

The music at times borders on Celtic violin and other times it is close to classical. Overall, this is a magnificent album. Dark Waters is exactly as the title states, very deep, mysterious and sometimes a little scary, but in the end the listener is left feeling peaceful, and that is quite an achievement. Dark Waters is poetic, and totally original.

Born and raised in Whitby, Aaron discovered music through his love of The Beatles. This led to a career in radio, writing for various publications, and ultimately a radio show about The Beatles (Beatles Universe), which ran for over four years. When not immersed in music, Aaron enjoys spending time with the loves of his life -- his wife Andrea, and daughters Emily and Linda (all of whom have an intense love of music too).
RELATED ARTICLES
album reviewalbum reviewsedwin huizinga
7.0