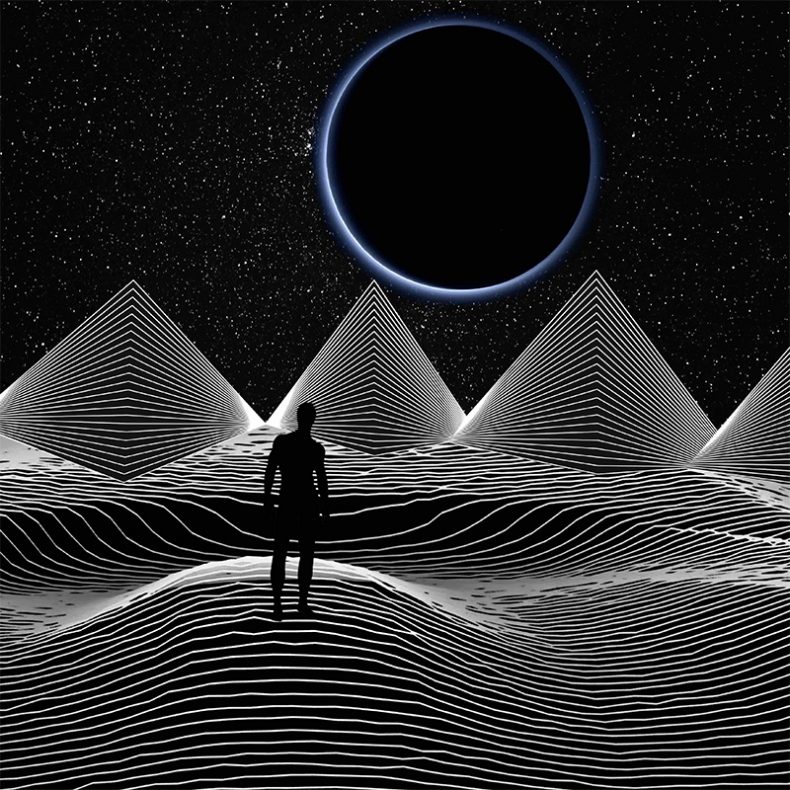 While it doesn’t frequently happen that a well-known artist, known mainly for his contributions to the alternative, pop or rock realms, turns to creating ambient compositions. However, there are several notable instances where this has happened quite recently. Take for instance, Roger O’Donnell – best known as keyboardist of post-punk trailblazers The Cure, he has now released several albums that can generally be considered ambient. And then there is Simon Scott of Slowdive fame – a drummer and composer of introspective ambient music, released by UK label Sonic Cathedral and elsewhere. Now we can add one other artist to that list – is this a growing tendency? We don’t know, but what we do know is that the new album from Chicago-based artist of1000faces is a shimmering gift to the ambient music world. Entitled ‘Astronomica’, this long-play is the first album of three in what will be known as the ‘Monomyyth’ trilogy.

of1000faces is the solo project of Matt Walker, renowned for his formidable drumming skills for multiple top-tier alternative artists. For 25 years, he has toured and recorded with such icons and luminaries as Morrissey, Smashing Pumpkins, Garbage and Filter, all the while dedicating himself to a myriad of independent bands, side projects and film/tv work.

This initial collection of 12 tracks is elegant and distinctive, with a great sense of wonderment and spaciousness. Like a weaving of reverie between the stars, this music would not be out of place in futuristic-themes playlists or can just be enjoyed alone as a standalone album, with some tracks likely to lead to daydreaming, while others are more pensively thought-provoking. Bravo!

Known for his obsessive writing and recording while on tour, Walker eventually decided to pursue a more singular and personal endeavor. Thus was born of1000faces, the moniker reflecting the project’s inherit premise and, at the same time, a nod to Joseph Campbell’s ‘Hero of 1000 faces’.

“I work on my music whenever and wherever I can, usually while on tour. It’s a slow process. Each song feels like it’s own vision quest,” says Matt Walker.

Although another of1000faces art-pop album is currently in the works, Walker shifted focus recently with a wave of creative inspiration that took the shape of an instrumental trilogy. The current pandemic, a tenuous week in London, an inspired transatlantic flight and a cold, rainy week in Chicago provided the canvas for this new series of releases.

‘I was on tour (with Morrissey) when the pandemic hit full stride. Shows were being canceled as cities were shut down one after another, and we ended up stranded in London for a week, not knowing when or if we’d be going home. They were surreal and uncertain days. I started recording some ambient music in my hotel room and soon found myself completely obsessed with it. I simply couldn’t stop. Aside from seeking out food and running at night I didn’t leave the hotel room. Finally we were sent home on the last flight out before the U.S. closed its borders,” says Walker.

Once home, he self-isolated. “It was difficult being segregated from my family, who I had already not seen in over a month. Fortunately, I had a self-contained living space on our 3rd floor and the isolation and dreary weather only inspired more writing. And now I was able to utilize more instruments and effects. 8 days later I tested negative, rejoined the household and had nearly 3 album’s worth of instrumental music.”

The ‘Astronomica’ album will be released digitally and available across online stores such as Apple Music and streaming platforms such as Spotify. It can also be obtained via Bandcamp at https://of1000faces.bandcamp.com/album/astronomica