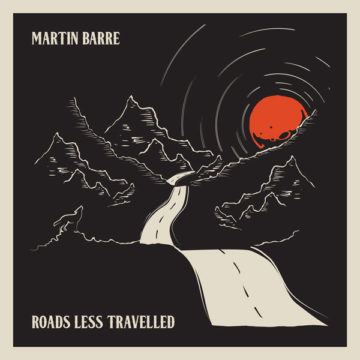 Martin Barre was the lead guitarist for Jethro Tull from 1968 until 2003, with The Jethro Tull Christmas Album being the last studio album he worked on for Jethro Tull, even though he only played on one song. While in Jethro Tull, he started his solo career in 1992 with his debut solo work (A Summer Band, a rare, limited edition album featuring live tracks).  Since then he has recorded six further studio albums with Road Less Travelled being his eighth solo album.

For this album, Barre works with musicians from the area in which he lives in England, Devon.. His band includes: Dan Crisp (vocals), Alan Thompson (bass/fretless bass), Darby Todd (drums), Becca Langsford (vocals/backing vocals), Josiah J (Percussion/Hammond), Aaron Graham (drums), Alex Hart (vocals/backing vocals) Buster Cottam (“stand up” bass). They deserve a great deal of credit, as their performance is the best thing about this album.

It is not a bad album at all, it is just more of the same. It is exactly what you expect from Barre. At times, he sounds more like Jethro Tull than Ian Anderson on his solo albums. This is not a bad thing, but after all these years one hopes that he could go in a different direction. He has dabbled in different genres in past albums, but here he plays it safe. For Road Less Travelled he dips into prog rock and he does it well. Let’s face it, Barre is a fantastic guitarist (he has come up with some of the most famous guitar parts in rock history). And his musical performance is both melodic, and at times very moving.  I just wanted him to break out of his comfort zone and go for broke.

A great deal of credit must go to Dan Crisp and Becca Langsford for their strong vocals and bringing the songs to life. The songs themselves are fine, nothing special, but not unpleasant. It is a good album. It just would have been better had Barre and his talented group decided to extended themselves and incorporate new sounds and ideas to the record.

Fans of Jethro Tull will enjoy the album, I enjoyed Road Less Travelled. It just could have been better.