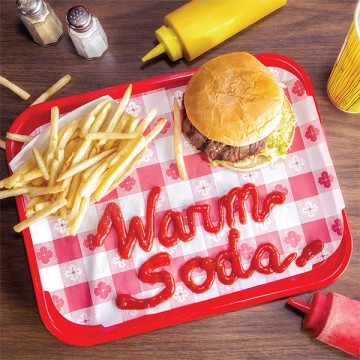 Warm Soda frontman Matthew Melton crafts tidy songs about summer. Actual lyrics be damned – the words themselves deemed irrelevant by the vibes, man. Warm Soda spins quick and catchy ditties meant to envelop you in a feel-good haze. An ice bucket filled with flavorless beers, a vague distant smell of charred meat, human flesh rotting underneath the hazardous rays of the sun. General bliss. Nostalgia for summers best viewed through the fogged goggles of time and distance.

I listened to Symbolic Dream. That feel-good vibe enveloped me. I listened to Symbolic Dream again, a third time. or did I? Had the album cycled around again? Was this the end or beginning? Was there any difference? I couldn’t tell when one song ended and another began. I gave the music my full and undivided attention, sensory deprivation, aka staring at the progress bar while the songs played. Here’s the ugly downside of focus. To listen to Warm Soda’s third full-length album as I would to a record that’s really hooked me, that’s engaged me on a visceral/emotional/intellectual level, revealed Symbolic Dream’s true identity: a one-note, rarely inspired exercise in monotony. The same wistful, wanting mid-tempo balladry foregrounding a rote set of drum cadences and sun-kissed guitar riffs in the name of aloof doo-wop-laced simplicity.

That said, let’s scale back on the harshness for just a second. In isolated bits and bites, Warm Soda’s tracks elicit the intended response. Easy rocking for a hipper sect. The album begins with “I Wanna Know Her,” a mélange of memories from that indistinct summer of 2004, a nostalgia trip with Melton’s angsty, velvety vocals. At not even two minutes long, there’s a want for more, but not just more, there’s a want for growth and expansion of these ideas. “Crying For a Love,” “I Wanna Go Fast,” “Can’t Erase This Feeling” – the rest of the tracks fall in line, avoiding crescendos and drama that might awake us from our waking slumber. Once you reach the end, however, “Lemonade Lullaby” slams on the breaks, turns up the distortion and recalls Marty McFly’s pre-rocking songs at the Enchantment Under the Sea Dance. This is the greatest tonal shift on the album.

Symbolic Dream reminds me of a concept album, some sort of Warhol-brand experiment that hypothesizes the listener will sit through an entire record without recognizing that all the tracks are exactly the same. Click through the track list, select any random moment; it’ll sound just like that last. Out of context, excised from the record any individual track offers a fleeting moment of utility. But don’t let those moments delude you. This is a record with one rock solid, time-tested idea played on a loop. This is the soundtrack of summer, played in the background when nobody’s really paying attention.

James David Patrick has a B.A. in film studies from Emory University, an M.F.A in Creative Writing from the University of Southern Maine, and an honorary Ph.D. in bullshitting about everything else from the College of Two Pints. His fiction and non-fiction has appeared in PANK, Monkeybicycle, Squalorly, Specter Lit, and Bartleby Snopes among other wordy magazines. While he does not like to brag (much), he has interviewed Tom Hanks and is pretty sure you haven't. He bl-gs about music, movies, and nostalgia at thirtyhertzrumble.com and runs the James Bond Social Media Project at thejamesbondsocialmediaproject.com. James lives in Pittsburgh, PA.
RELATED ARTICLES
album reviews
9.0