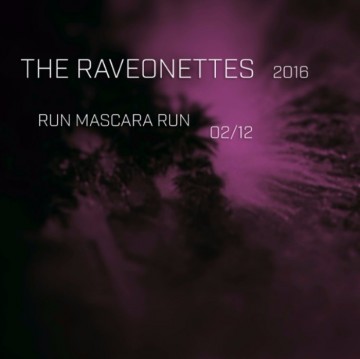 The Raveonettes share a brand new track entitled ‘Run Mascara Run’ premiered this week via Q Magazine. The track is the second release from the duo’s RAVE-SOUND-OF-THE-MONTH playlist where they’ll be uploading a freshly recorded track on the last Friday of every month until December. The ‘anti-album’ will feature a collection of new tracks that aren’t bound by the constraints of the format. A 12-month ride, potentially schizophrenic and disjointed, potentially cohesive and related. Join the RAVE-SOUND-OF-THE-MONTH and subscribe to the playlist

Sune Rose Wagner said of ‘Run Mascara Run’, “…’Run Mascara Run’ was partly inspired by a trip to the Bronx in NY with my mentor Richard Gottehrer and the one and only Dion, of Dion And The Belmonts fame. I remember distinctly Dion telling fantastic stories of gang life, girl crushes and of course Doo Wop. Hip Hop of course has always been a huge influence on everything I do so for the first time I decided to add a spoken word, stream of consciousness, rap part to a Raves tune. The notion of girls going off to war, instead of men has been haunting me for quite some time, imagine if that was the case! Images of the War in the Pacific, California surfer boys grieving the loss of their girlfriends or wives, etc. What if bombs had fallen in George Lucas’ American Graffiti? This is quite a schizo tune! Rave On X…”