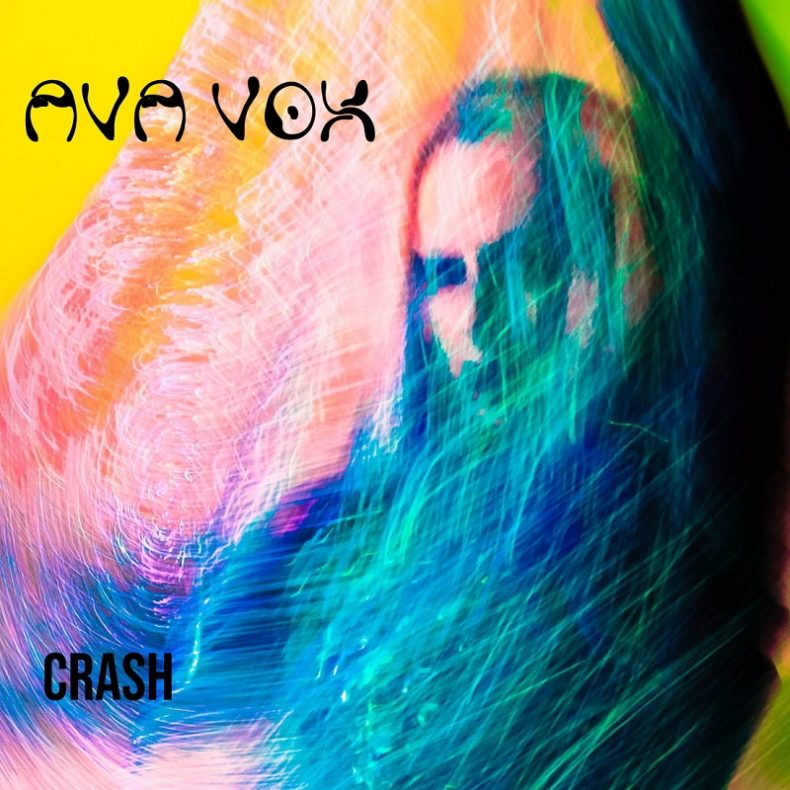 2021 has been a year of comebacks for numerous bands who signed and released music once upon a time (in the 80s or 90s) and are now reforming or coming together with their original lineup in order to release new material. But so too has it been notable for the emergence of multiple artists who actually did have a bright start to their music career back in those decades, having gained a reputation and following that were limited regionally – sometimes they also reunited to release their first music after never having the opportunity to record and release any music (in the days of reliance on labels) and some were involved in other projects back in the day and are now emerging to release solo material after taking a lengthy hiatus. The artist we present today fits in the latter category.

We are delighted today to introduce you to the debut video clip by Dublin-based post-punk alt-rock songstress Ava Vox. Thursday brings the release of her new single “Crash” and the video warns of the environmental devastation that we have brought upon the planet. The white witch goddess appears (symbolizes mother nature, who loves the earth and all its species/human race). She gives you a glimpse of the present and what the future could be, the end of the world/extinction of species/human race.

Ava Vox is the stage name of Elaine Hannon, a Dubliner currently living in County Meath. While she’s been involved with various music projects in the past few decades, her Ava Vox persona emerged in September 2020. With a unique vocal timbre and commanding delivery with a dash of Goth and Post-Punk, Ava Vox’s musical style ranges from slow melodic atmospheric to dynamic rock.

Considering that this is the first time that the world is hearing her under the Ava Vox moniker, folks are in for a pleasant shock in the same way they may have felt upon hearing Siouxsie and the Banshees for the first time. Ava Vox delivers a mind-bending performance – such a powerful voice that is haunting in its nature, like an old spirit that has been given voice – and a superb one at that – making Ava one of the most impressive musical debuts to emerge from The Emerald Isle this year. Impressive and one to watch in 2022 for sure.

This is the first taste of Ava’s forthcoming debut album ‘Immortalised’, anticipated for release in early 2022. It was produced by Ray McLoughlin (RMC Recording Studios), a musician and producer who has performed or recorded with innumerable artists from Cliff Richard,  Daniel O’Donnel, Francis Black, Brian Kennedy, Derek Ryan, Nathan Carter, the RTE Concert Orchestra, Rick Astley and Mary Coughlan, He has toured worldwide, performing in venues such as the Royal Albert Hall, Carnegie and the Sydney Opera House, in addition to serving as musical director for shows for RTE, BBC, PBS America and SKY.

In February 2021, Ava Vox debuted with her rendition of The Cure’s ‘Love Song’, slowing down the tempo and solely accompanied by piano, performed by Ray McLoughlin. She followed up with ‘Strange Days’ single, a 2-track release that included her own rendition of Soft Cell classic ‘Tainted Love’ and beloved Bowie track ‘Life on Mars’.

Elaine first ventured out as a vocalist when 17, quickly graduating from backing to lead vocalist. In the mid-1980’s, Elaine formed gothic rock / post-punk band The Seventh Veil, which ultimately disbanded in 1991. After significant airplay and excellent reviews by the likes of Hot Press Magazine, Eamonn Carr, and the Evening Herald, the band won the Battle of the Bands competition, the prize being recording time with Dublin producer Paul Thomas, well known for his work with U2, Kate Bush, UB40, Status Quo, Davy Spillane and Clannad.

“This new interpretation of the lyrics of the song “Crash” allowed me to really let loose. “Crash” brings you somewhere – to a place, to another dimension, another time / futuristic. The music and the words lead me to create a music video (forthcoming) about the consequences of Global warming/climate change, to our planet and the human race,” says Ava Vox.

Ava Vox counts numerous artists among her influences, including David Bowie, Patti Smith, The Cure, Siouxsie and the Banshees, Cocteau Twins, Bauhaus, Japan and The Cult.

As of December 16, “Crash” will be available across online stores and streaming services, including Apple Music, Spotify and Bandcamp. Ava Vox is currently completing work on new album Immortalised, due for release in early 2022.

Also enjoy Ava’s previously released singles, each a cover of a group you probably already know all too well: