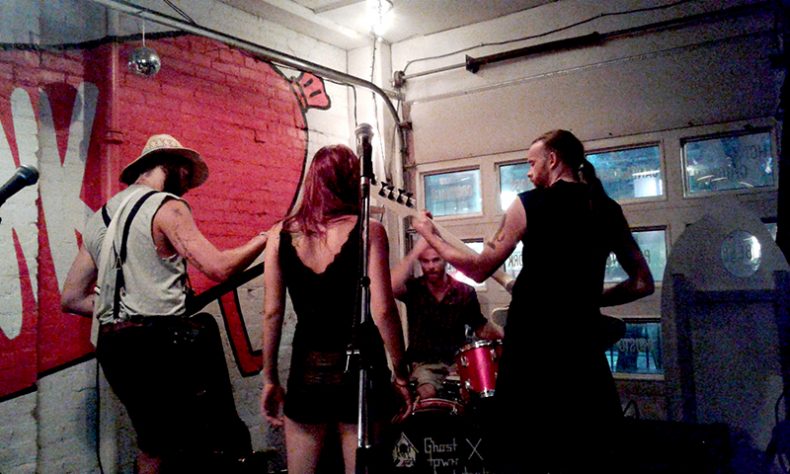 A SPILL VIDEO FEATURE – THE MARROWS

AN EXCLUSIVE INTERVIEW WITH CHRIS FORT

I’m in a band called Treefort. We are part of Trondo’s open-mic scene, and I’d like to show you what it’s like out there. It’s a great scene full of character and characters, so instead of going to a club and listening to stuff you’ve heard a bazillion times- why not get wasted and check out Trondo’s homegrown talent at an open-mic?

Today, I’m going to introduce you to a band called “The Marrows”. Before the interview, I’d like to tell you a little about them.

I met them last year at The Cavern hostile’s bar. Kyle, who would become their drummer as they formed, hosts their open mic. I remember seeing them on stage and being blown away. Treefort was there. Drew, (our bassist and wizard), was pretty pleased with AC, their bassist. It was probably the kilt and sideburns. Drew admires a good set of sideburns. Charles, their guitarist- I don’t think he knows about sleeves. Either that, or he has abandoned them for more control over his guitar… Sometimes sacrifices have to be made in the name of Rock and Roll. Then there’s Irina. I’m not going to remember how she said it exactly, but I think she is best summed up in something she said to me once about having the songs she had written in her room, realized in the Marrows. The way she said it was how someone speaks when they are in love. This is exactly the right attitude. EXACTLY the right attitude.

Anyway- that’s my schpeal. They’ve got an EP out, and a second in the works RIGHT NOW. When Treefort returned to Seafort (where we live), we immediately popped it in the disk-shaped cassette player, and wow; the quality of the audio is just straight-up, on-fleek! The songs are great, as we already knew, but damn. That’s some lemon fresh clean that comes only from elbow-grease. Find them HERE, and catch up with them at a show or open mic. It’s never expensive, they play a lot, and if you mosh Irina might use a squirt-gun to shoot booze in your mouth during the performance. …hey… it’s free booze.