SPILL TRACK OF THE DAY: RETURN FOR REFUND – “THE FIELDS” 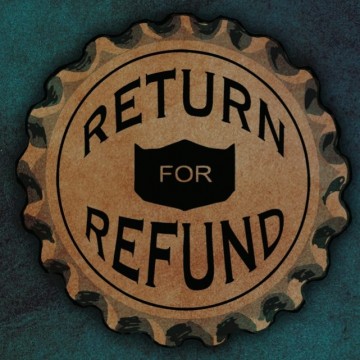 RETURN FOR REFUND – “THE FIELDS”

Return For Refund found themselves as semi-finalists during this year’s Indie Week, and the spot on the list was well deserved.  Toronto’s three-man, with Drew Clementino on rhythm guitar and vocals, Sasha (The Molotov Cocktail!) Molotkow on lead guitar, and Karlis Hawkins on stix, there is no room for a bass riff — and for this they make no apologies.  Their sound is jagged, hard assed, and cuts to the chase.  You’re still welcome to ask for your refund, but it’s not likely you’ll want it.  Check out this track from their debut EP, last year’s Return For Refund.

About Return For Refund:

Eager to establish themselves in the music scene with the creation of their first EP, the Toronto based band Return For Refund define themselves through their contagious, riff driven sound. With edginess and raw vocal grit, Return For Refund blends elements of Rock, Punk, Metal, Funk and Blues in harmony.

Gaining inspiration from bands such as Black Sabbath, Nirvana, and Soundgarden, each member brings their own unique flair to the group. Frontman Drew Clementino, the riff crafter and wordsmith, is the lead vocalist and rhythm guitar player. Immediately after picking up the guitar at twelve years old, Drew wrote his first song. “It was always about developing my own sound and playing in a band. That’s how I learned. I made a very conscious effort when I was learning not to focus on learning other peoples’ music” says Clementino.

As the band’s hell raiser and guitar shredder, Sasha Molotkow adds a technical touch to each song. When listening to their music, you can hear the intricate and technical instrumentation he brings with his fast, crazy shredding. He provides the band their metal-type edge. As a lover of funk, reggae and anything with a good strong beat, Karlis Hawkins is the band’s instigator of funk and flow. His drumming style perfectly compliments Clementino’s beat oriented guitar riffs.

Formed in 2013, the band was created after Drew left the army to pursue his musical ambitions. During his seven years in the military, he always found himself writing songs and bringing his guitar no matter where he went all over the world. After auditioning for a few bands that didn’t fit his sound, Clementino tried out for a cover band where he felt an instant chemistry with their guitar player, Sasha. Later that night, he went to an open mic and coincidentally came across that same guitarist. “We ended up playing a bunch of Blues songs like Mustang Sally and Red House. He played guitar and I sang. We just immediately hit it off,” says Clementino.

Clementino joined the band and the chemistry between him and Molotkow grew. Soon, they felt that they were moving in a different direction from the rest of the band and left. Serendipitously after leaving, Karlis, Molotkow’s high school band’s drummer, returned to Toronto after deciding he wasn’t going back to school in Halifax. With a lead vocalist, guitarists and drummer, Return For Refund was born.

Rooted from the band’s personal experiences, the name “Return For Refund” has developed a meaning all its own. Reflecting on his own life, Clementino says “I’ve identified the name with my own return from the military. I wasn’t happy with the things I was doing and the person I became. I’m back and I’m asking for my refund from the lies they sold me; I want my money back.”

SPILL TRACK OF THE DAY is published daily, showcasing the best in recent independent releases, with a focus on the Toronto Indie Music Scene. We also feature tracks from across Canada and around the World, including Canadian francophone releases. Remember -- you heard them here first. ;)
RELATED ARTICLES
return for refundtrack of the day