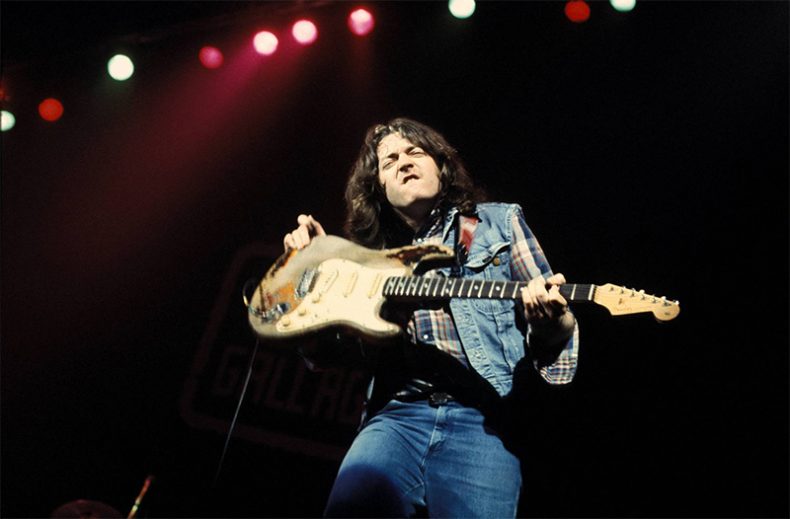 Rory Gallagher began his career with the power rock trio Taste in his native Ireland in the late ‘60s. After releasing two studio albums and two live recordings, the group disbanded just as they were finding an audience. During his time with Taste, Rory combined blues, jazz, folk, and proto-metal and forged a unique sound that was completely different from any hard rock act of the day. There was something uniquely Irish in his guitar technique and musicianship that separated him from the likes of Eric Clapton or Jimi Hendrix.

His post-Taste career saw Gallagher making some of the best blues rock albums of all time, however his efforts went largely unnoticed by the record buying public. While he never had the success of his peers, Gallagher is still cherished by both blues aficionados and guitar players alike. Artists as varied as Brian May, Johnny Marr, and Slash have all praised him and cited him as a key influence in some way.

On June 14, 1995 after years of years of alcohol and prescription drug abuse, Rory Gallagher’s liver failed him. He was 47.

The albums below include both live and studio recordings from Gallagher’s solo career. Typically, live albums are omitted from rankings such as these, however since some of his best work was typically recorded live, we’ve made an exception. 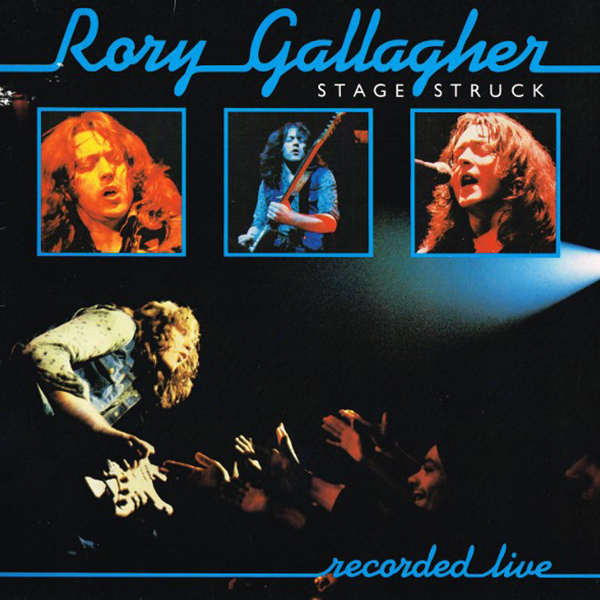 Generally speaking, Gallagher was at his best when playing live. Naturally a shy person, he morphed into a guitar god with an incredibly energetic stage presence when in front of an audience, though on his third official live release, Stage Stuck, we find something lacking. While his guitar technique is still good, it seems uninspired and you can hear the booze and pills beginning to their toll on his vocals. Key tracks: “Shin Kicker”, “Brute Force and Ignorance” 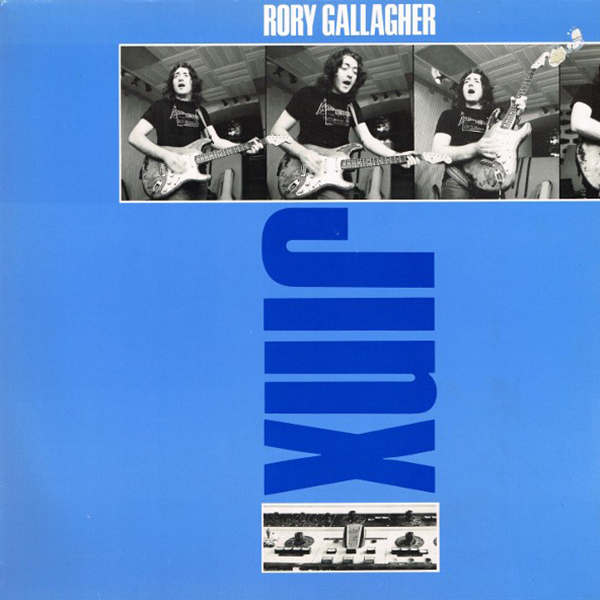 At the beginning of the ‘80s Gallagher seemed to be losing his way in the studio. After two solid recordings with this new power trio lineup, he started slipping with Jinx. While on Photo-Finish and Top Priority he managed to maintain his signature tone, here it seems as though he was aiming for a heavy metal vibe. His style seemed to be leaning toward that of Van Halen. Through all of the unimaginative material though the rock ‘n’ roll inspired “The Devil Made Me Do it” is one killer track. Key tracks: “The Devil Made Me Do it”, “Big Guns” 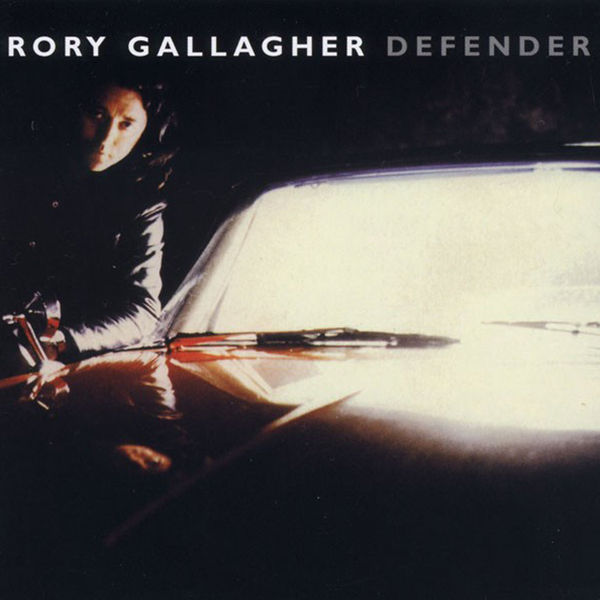 While a slight improvement over the lackluster Jinx, Defender suffers from much of what Stevie Ray Vaughn’s later work does, overproduction. While there seems to be a sense of Gallagher returning to the blues, the album is too slick and, when listened to 30 plus years later, sounds more like lounge music than the top tier blues rock Gallagher was capable of producing. Key tracks: “Loanshark Blues” “Continental Op” 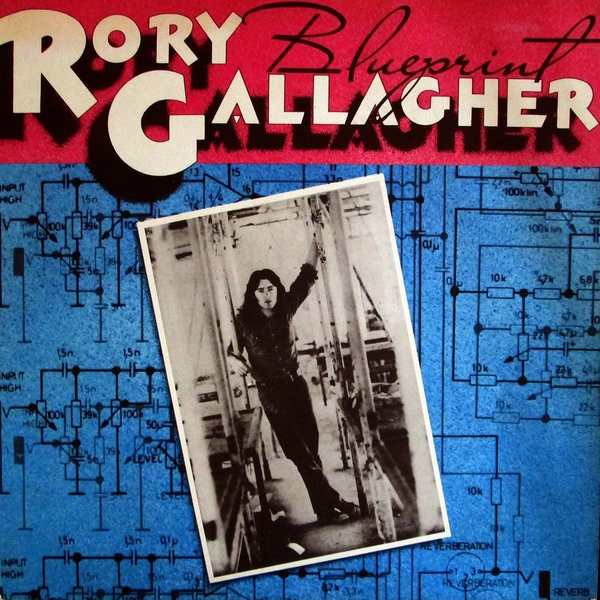 With the addition of keyboardist Lou Martin and drummer Rod De’ath, Gallagher’s third studio release sees him exploring completely new ground. Perhaps to make a more cohesive four-piece sound, he dials back the signature aggressiveness of his technique. The new incarnation of the band, together less than a year at this point, sound as if they are still trying to find their sound for most of the songs. While there are certainly some gems on Blueprint, they are outweighed by the forgettable filler material that bogs down the rest of the record. Key tracks: “Walk on Hot Coals”, “Unmilitary Two-Steps” 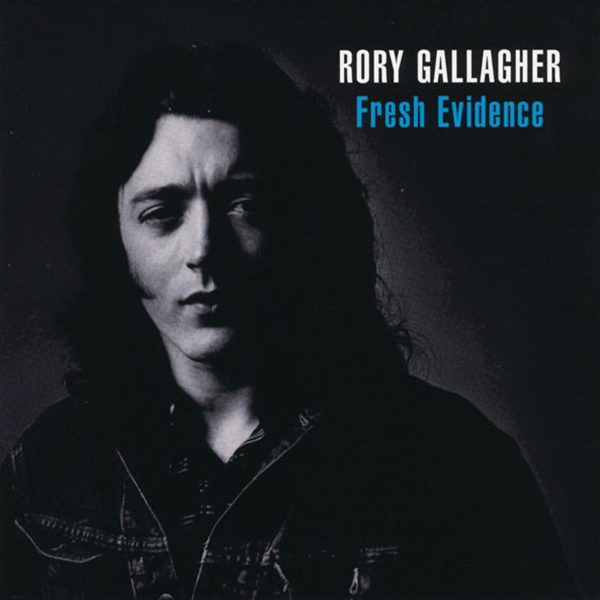 On Gallagher’s last studio album, we find him returning to the music that he began his career with, the blues. Tracks like “Middle Name” and “Empire State Express” have that old school grit to them that hadn’t been heard on list recordings since the mid-‘70s. There are some fresh elements though with Gallagher introducing a New Orleans Zydeco vibe on tracks like “The Loop”, “Ghost Blues” and the aptly named “King of Zydeco”. Key Tracks: “Ghost Blues”, “Empire State Express” 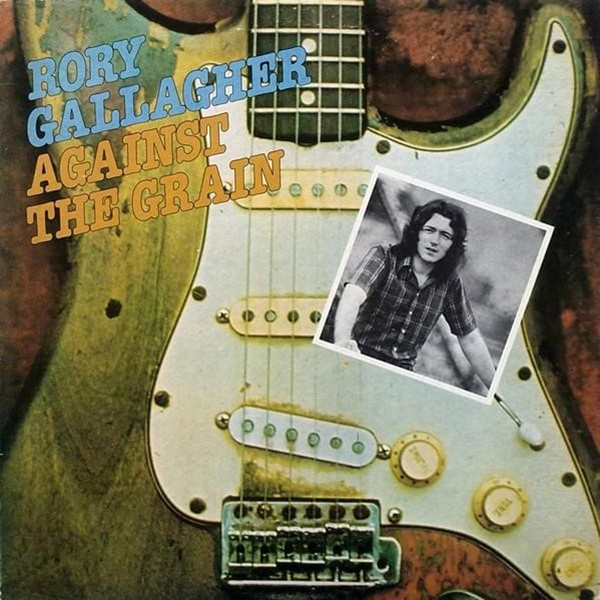 Coming hot off of his legendary Irish Tour, Gallagher’s return to the studio was solid but nowhere near as triumphant. While there is some brilliant material on here, “Bought & Sold” is be one of his most well-crafted songs, there are a lot of tracks on this one that are just vanilla. Hidden gems like “Lost at Sea”, “I Take What I Want”, the Leadbelly cover “Out on the Western Plain” are fantastic, the filler songs that start the album off do not set the stage for the other worthy tunes. Key tracks: “Bought & Sold”, “Out on the Western Plain” 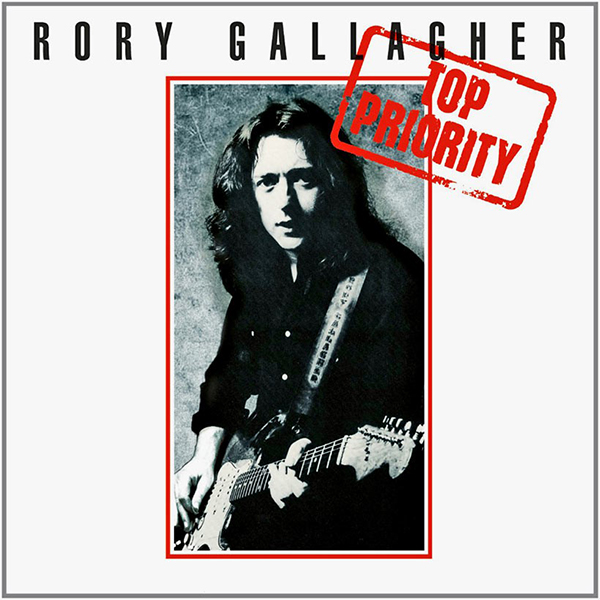 Continuing to shy away from the classic blues that he began his career with, Rory takes one step further into the hard rock realm that he began exploring on Photo-Finish. Taking inspiration from Eddie Van Halen, Top Priority finds Gallagher dabbling in heavily distorted and flanged-out riffs. Still willing to experiment here, Gallagher borrowed an electric sitar from Pete Townshend which brings to life “Philby”, the second track on the album. On Top Priority he is beginning to shout more than actually sing but the overall crispness of the band makes this somewhat unnoticeable. Key tracks: “Follow Me” “Bad Penny” 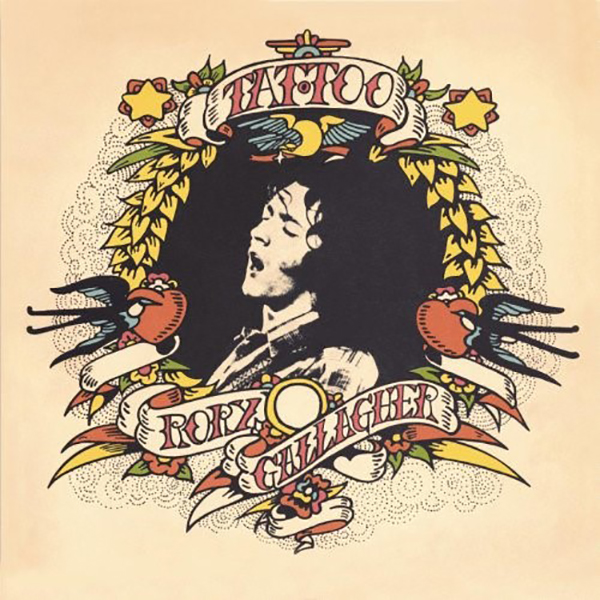 After the somewhat dull Blueprint, the four-piece Rory Gallagher band really started to gel here. The jazzy “They Don’t Make Them Like You Anymore” is pure magnificence, while “Living Like a Trucker” oozes ‘70s funk. Tattoo sees Gallagher compose tighter material like “Cradle Rock” and “A Million Miles Away”, while still managing to let loose his fiery solos when needed. Key tracks: “Tatoo’d Lady”, “They Don’t Make Them Like You Anymore” 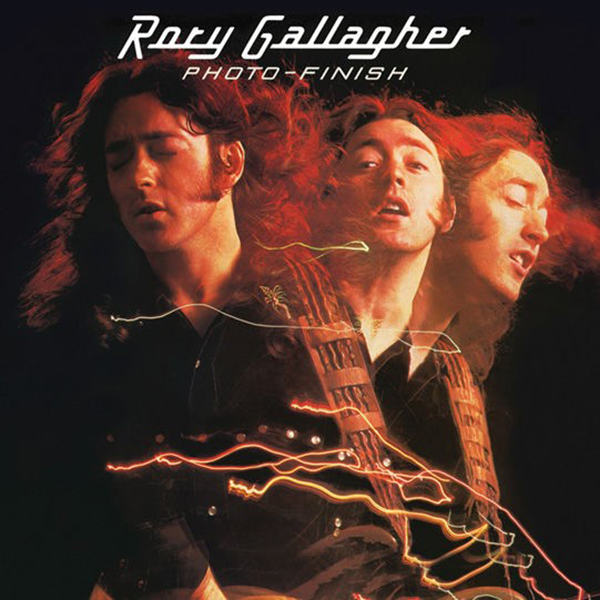 Having recently seen the Sex Pistols live, Gallagher was so inspired he decided to take things back to basics. The result saw the end of his four-piece, with Rory dismissing drummer Rod De’ath and keyboardist Lou Martin. Keeping long-time bassist Gerry McAvoy and adding drummer Ted McKenna, Gallagher’s battered Stratocaster once again becomes the primary focal point for his newly envisioned sound. Kickstarting the album with the punky “Shin Kicker”, there is very little reason not to like that follows. Bringing the influence of ‘50s rock with “Cruise on Out” and “Last of the Independents” and even throws in somewhat of a power ballad with “Fuel to the Fire”. However, it is the rifftastic “Shadow Play” that steals the show. Key tracks: “Shadow Play”, “Cruise on Out” 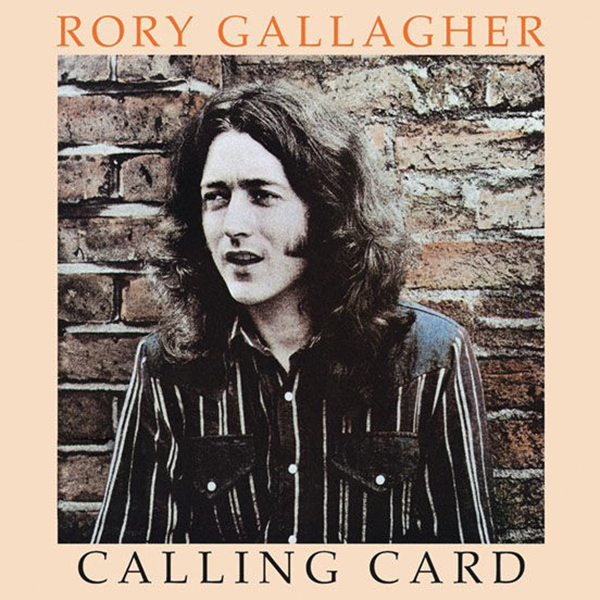 Gallagher’s final album as a four-piece is certainly one of his most well-crafted and well-produced albums of his career. Hiring Deep Purple bassist, Roger Glover, to produce helped breathe new life into Rory’s studio work. Tracks like “Moonchild”, “Edged in Blue” and the folky ballad “I’ll Admit You’re Gone” are some of his best honed tunes. Any one of these could have been smash hits on the rock charts of the day. Gallagher, however being a staunch opposer of singles decided against it and stuck to his artistic integrity. One could only imagine if he had listened to the A&R men how different his career could have gone. Key tracks: “Moonchild”, “Edged in Blue” 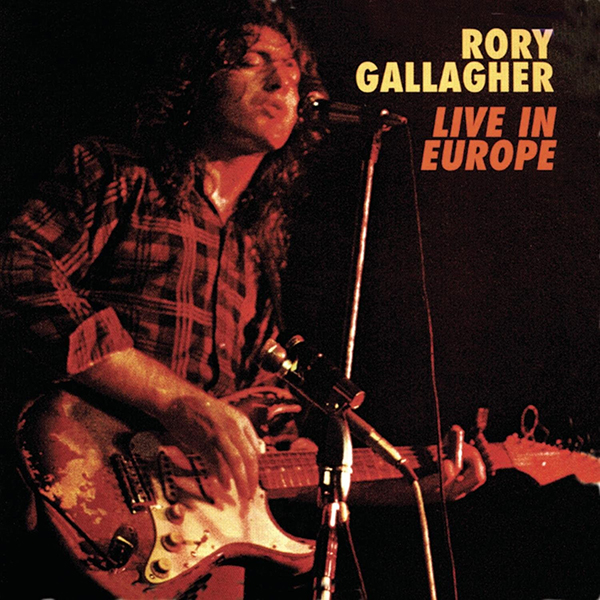 The signature Rory Gallagher tone is a Fender Stratocaster plugged into a Vox AC30, boosted by a Dallas Rangemaster for some extra grit. Brian May of Queen, who loved Gallagher’s sound, has stated many times that he used nearly identical gear to copy his tone. When listening to Live in Europe, his first gold album, it’s clearly evident where May found his sound. Gallagher, feeding off the live audience, plays some absolutely filthy guitar licks that he rarely captured in the studio. On the flip side to the hard-edged blues, there is some great acoustic material. Gallagher brings out the Dobro slide guitar on Blind Boy Fuller’s “Pistol Slapper Blues” and even nails on the mandolin with “Going to My Hometown”. If you are looking for an album to familiarize yourself with Gallagher’s music, this is a great place to start. Key tracks: “I Could Have Had Religion”, “Messin’ With the Kid” 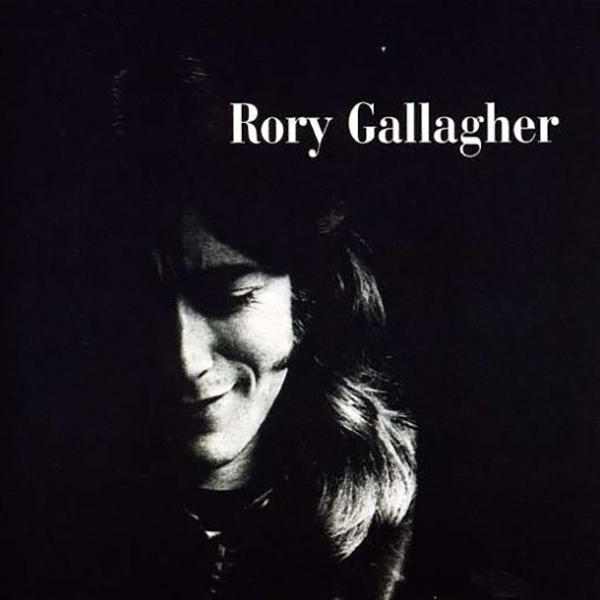 After the breakup of Taste in 1970, Gallagher wasted no time in forming a backup band for his solo career. Accompanied by Wilgar Campbell on drums and Gerry McAvoy on bass, the newly-formed trio gelled instantly. Still hot off his stint with Taste, there is a freshness to these songs that he rarely would ever achieve in the studio again. “Just the Smile” is beautiful acoustic ballad that could have been a perfect single, while “Laundromat” has to be the most criminally underrated blues rock track ever. But there’s more to his debut than just acoustic ballads and blues licks. On “Can’t Believe it’s True” and “I Fall Apart” Gallagher shows off his versatility by experimenting with jazz-inspired licks and solos. Much like Calling Card, Gallagher’s self-titled debut has incredibly well-honed material that showcases his gifts as a guitarist without taking away from the essence of the songs themselves. Key tracks: “Laundromat”, “Just the Smile” 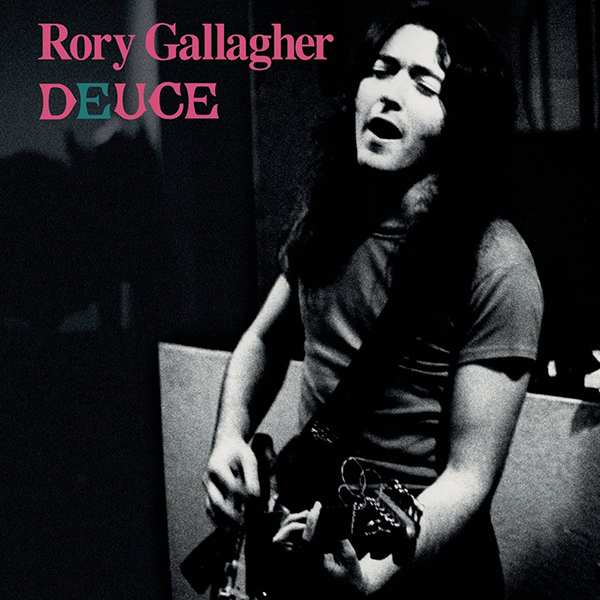 Released a mere six months after his debut, Rory rushed out the raw and gritty Deuce as a follow up. The tracks were recorded both before and after his live shows in order to give the feeling of a live concert. The result is a beast of an album with some of the most intense jamming of Rory’s career. Gallagher showcases his slide guitar playing more on this album than perhaps on any other with beauties like “Crest of a Wave”, “Whole Lot of People” and “In Your Town”. There is more to Deuce than just aggressive blues rock; tracks like “Out of My Mind” and album opener “I’m Not Awake Yet” show of his ability to craft scenic folk-rock. The latter track, a brilliantly composed tune, is based around McAvoy’s pulsating bass lines giving Rory free rein to experiment with acoustic Celtic guitar parts. Guitar legend Johnny Marr, formerly of the Smiths, has citing Deuce as a key influence to his early guitar playing. Key tracks: “Crest of a Wave”, “Maybe I Will” 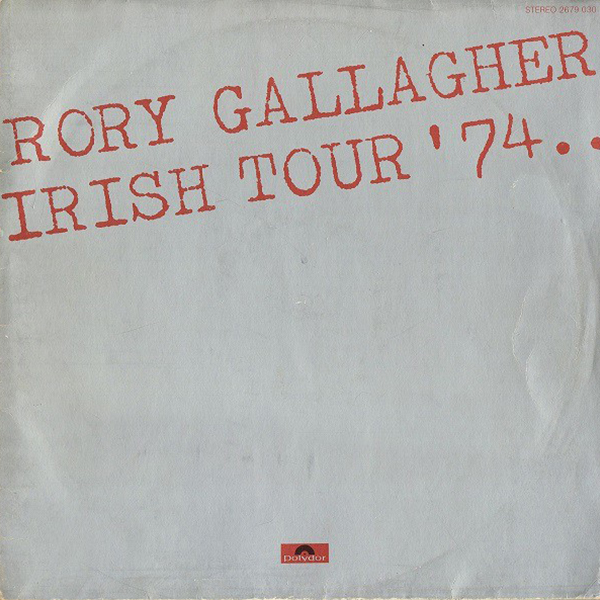 If there is one album to sum up who Rory Gallagher was, it would be Irish Tour. Recorded over several shows in January 1974, the tour coincided with the tumultuous times in Belfast known as “The Troubles”. Violence from the IRA had kept most acts, Irish or not, from performing on the Emerald Ilse. However, Gallagher felt obligated to stick to the touring schedule and show his countrymen a good time. While it was never documented which tracks were recorded in Belfast, Gallagher recorded in Dublin and Cork as well, the energy between band and audience seems to be amplified by the troubles of Ireland giving Irish Tour an intensity few other live albums can match. Gallagher’s blistering solos on “Walk On Hot Coals”, “Cradle Rock” and “A Million Miles Away” are on a completely different level of genius than their studio counterparts. You can hear he is pushing himself to the limit and feeding off of the electricity of the Irish audience. Key tracks: “A Million Miles Away”, “Cradle Rock”

As a child growing up in the suburbs, Ryan found music as a way to soothe his boredom. After first hearing AC/DC at the age of 10, he was hooked on music. Tracing its roots to the ‘50s, he became obsessed with Elvis, Buddy Holly and Chuck Berry. Somehow that led to grunge, then psych-rock, then jazz, etc. The list goes on and on and his collection of vinyl records continues to grow.
RELATED ARTICLES
against the graindefenderfeatures