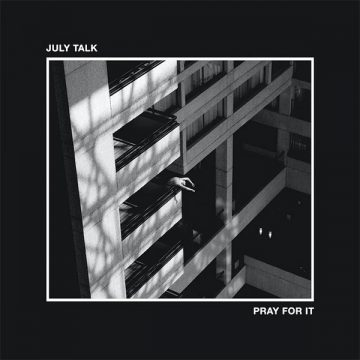 Key cuts on Pray For It include the mid-tempo rocker “Good Enough” and the high octane rocker “The News”. The dreamy dark ballad “Pay For It”  includes Fay’s vocal lament, “hard to break these ancient habits” . The radio-friendly “Pretender” is a gospel-guided collaboration with Toronto artists James Baley and Kyla Charter that presents potent truths about exploitation and privilege.

With the release of Pray For It, July Talk continues to develop both musically, and in their new roles as advocates of the recalibration of the music industry in a pandemic world.

Gerry Young is President of Current Records and Management, and author of the 2011 biography Pop Goes The Weasel: Rock And Roll Off The Record, available at Indigo/Chapters, Barnes & Noble, and Amazon.com. He has recorded and managed Juno Award winning bands Martha And The Muffins and The Parachute Club among others.
RELATED ARTICLES
album reviewalbum reviewsjuly talk
9.0