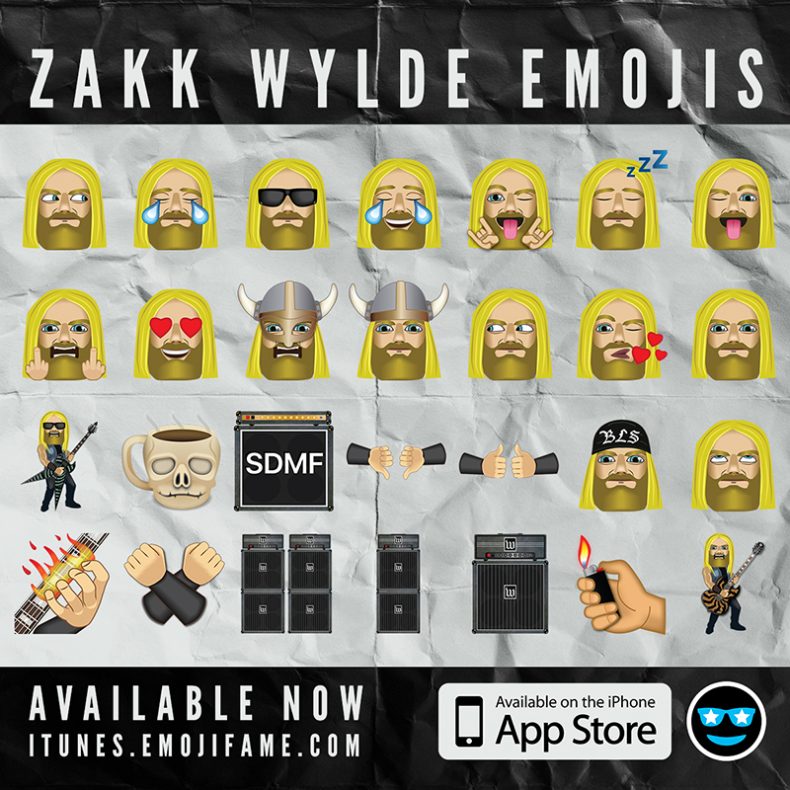 Guitar icon ZAKK WYLDE has released a new custom emoji set available starting today via Emoji Fame, the go-to company specializing in making emoji sets for musicians. Thus far, the artist emoji space has been dominated by hip-hop and EDM acts, Zakk Wylde’s set is one of the first on the rock/metal side of things, and the first for a guitar god.

“Many members of the Emoji Fame team are secretly guitar nerds, so when Zakk Wylde agreed to do an emoji set with us we were beyond excited,” says Gavin Rhodes, co-founder of Emoji Fame. “Zakk is arguably one of the top-ten most influential guitar players of all time and we’re immensely proud of the set that we put together with him. His emojis are hilarious with a double dose of SHRED thrown in for good measure.”

The emoji set is available starting today at http://itunes.emojifame.com

ZAKK WYLDE recently announced new U.S. and Canadian tour dates in continued support of his new LP Book Of Shadows II. Wylde will hit over 40 cities spread out across the U.S. and Canada this summer including a performance at Heavy MTL Festival in Montreal on August 7th, a first for him as a solo artist. Tickets will go on sale this Thursday, May 12th. Tyler Bryant & The Shakedown and Jared James Nichols will serve as support.

BLACK LABEL SOCIETY will also be included as one of the marquee acts on OZZFEST MEETS KNOTFEST announced just yesterday.

Wylde, as always, has been on the road nonstop. He just wrapped up a buzzworthy stint on Steve Vai’s GENERATION AXE TOUR and prior to that served as a marquee artist on THE HENDRIX EXPERIENCE TOUR with the likes of Billy Cox and Buddy Guy. This is the first time Zakk has toured as a headliner in the U.S. and Canada since last year’s Unblackened tour.

SPILL NEWS strives to keep our readers up to date with news and events in the music industry. We keep you informed of the most recent information regarding new releases, tour dates, and information items about your favourite artists.
RELATED ARTICLES
black label societynewszakk wylde