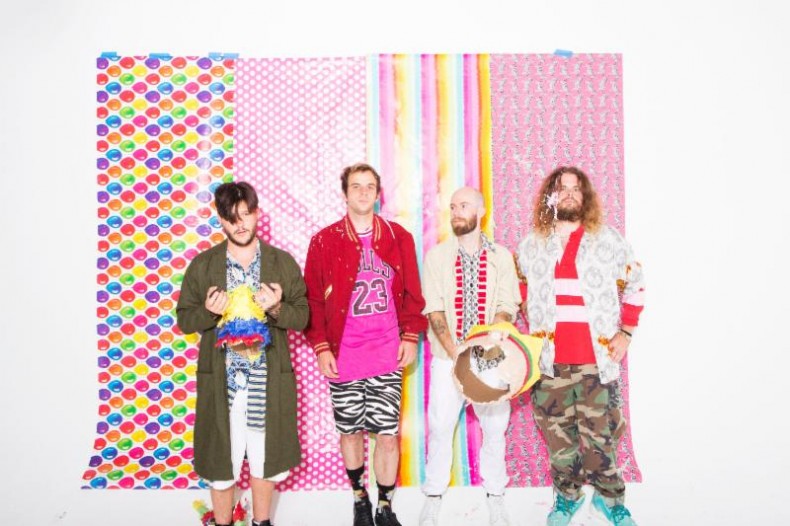 With their fifth studio album, V, on it’s way, Wavves‬ is sharing “Pony” which has become a standout in their live set while on tour. The record is due out October 2nd through Ghost Ramp / Warner Bros. Records and the band is set to embark on a string of tour dates running through September and October.

Inspired by their personal experiences with agoraphobia, sleepwalking, teeth grinding, time wasting, night terrors, toxic relationships, Web MD, and fucking up while trying to be better people, @wavves fifth full length studio album V sees the fuzzy LA noise pop outfit move into more mature, slightly hopeful territory, as they recognize that the momentary nihilism caused by their wicked hangover will soon end, thereby creating room for more and hopefully less wicked hangovers. “It’s not happy music, not at all,” singer Nathan Williams assures, “but it’s inspired by learning to be happy about the shittiest lows, trying to express a realistic optimism in the knowledge that nothing is ever going to be perfect, and there will always be some fucked up shit in your life…but you can have a positive outlook on it, if you want.” Hook-heavy and scrappy as ever, V is watershed album for Wavves on both a personal and musical level, wearing its bruised — but humbled — heart very much on its sleeve.

Featuring the previously released “Way Too Much” and “Flamezesz”, the 11-track LP was recorded in Los Angeles with the help of producer Woody Jackson (Daniel Johnston, Primal Scream, Tenacious D, Money Mark and Beck), who took the band’s trademark distorted no-fi into crisper, even more visceral territory while still remaining true to their 90s influenced roots, which stem back to 2008 when Williams created two albums’ worth of work using ’80s Tascam cassette recorder and Garage Band software. The last seven years saw Wavves grow from bedroom experiment into Billboard Top 100 ranking four piece featuring Alex Gates (guitar, backing vocals), Stephen Pope (bass guitar, backing vocals) and Brian Hill (drums), all of whom contributed to the writing of V, which is set for an October 2nd release through Ghost Ramp/Warner Bros. V marks the high point in an exceptionally busy year for the band-2015 has seen an LP collaboration with Cloud Nothings’ Dylan Baldi, a GZA collab with Williams’ side project Sweet Valley called “Planetary Energy”, and releases by Courtney Love and Spirit Club (his side project with brother Joel Williams and Jeans Wilder) on Williams’ Ghost Ramp label.

The band’s first solo album since 2013’s Afraid of Heights, the songs on V were inspired by a dark and epic Waiting for Godot-esque idle stretch of around eight months that occurred in between the end of the Afraid of Heights tour and the recording of V. Caught in a creative and emotional stasis, the band had “way too much time on their hands”, leading to the kind of bored, compulsive partying that was no longer about having fun, but about “just drinking, straight drinking,” with 100 beers and two bottles of Jameson the per night band norm. Bassist Stephen Pope developed a mild agoraphobia, and became scared to leave his bedroom. “I would order pizza almost everyday and hide in my room and pee in a bottle like in ‘The Aviator'”.

Williams tried to cut back on his drug and alcohol consumption, but fewer beers per day resulted in night terrors, as he adjusted to not being drunk every night. “I get a two day hangover if I do drugs now, and you have to think ‘is this worth it?’ I feel like that romanticized druggie alcoholism lifestyle is a sham.” Then came the paranoia about his health. “You can just ruin your own life by spending too much time on Web MD, convincing yourself you have cancer,” he said.

On top of all that, he was going through a breakup-no surprise, failed relationships are a major theme on the record. The song Heart Attack, for instance, is about “doing anything for a girl, making decisions that you probably wouldn’t normally make in an almost masochistic way. It’s like putting yourself in harm’s way, which I tend to do physically and emotionally. Sometimes that means I find it hard to think the best of people, although I am softening more over time.” All The Same is about a loose series of negative events that occurred in Williams’ life and acknowledging that sometimes “shit doesn’t work out, but in the end the people that you love around you are what’s the important part”. Pony’s chorus, “it gets better and better”, reiterates the ‘light at the end of the tunnel’ narrative that emerges, perhaps for the first time in Wavves career, in V.

By the time they got into the studio, the band members had gone through so much personal upheaval that it was a relief to start working again. The energy of the sessions was “a lot lighter and not as drunk” as on prior records, as V became something of a conduit for the kinds of feels that they wouldn’t usually feel comfortable talking about. The album artwork — the five of cups, the Tarot card of greatest loss — sums it up, the cloaked figure mourning the three spilled cups, while two are still full behind him. The message is clear: don’t cry over spilled beer, because there are two more right behind you. “We’ve never talked about this stuff in front of each other, outside the music,” admits Williams. “‘Cause guys are afraid to talk. It’s not like we say “Dude, I’m feeling sad today.” You know? That’s lame, dude.”

V officially hits stores October 2 via Ghost Ramp/Warner Bros., and will be supported with a North American tour.

SPILL NEWS strives to keep our readers up to date with news and events in the music industry. We keep you informed of the most recent information regarding new releases, tour dates, and information items about your favourite artists.
RELATED ARTICLES
newsponyV

by SPILL NEWS on January 29, 2023
RICKIE LEE JONES NEVER DID FOLLOW THE RULES PIECES OF TREASURE OUT APRIL 28 (BMG MODERN) The mood is jazz. The icon is Rickie Lee Jones. The voice just keeps getting better. Rickie Lee Jones’ latest album Pieces of Treasure (BMG Modern) is a [...]