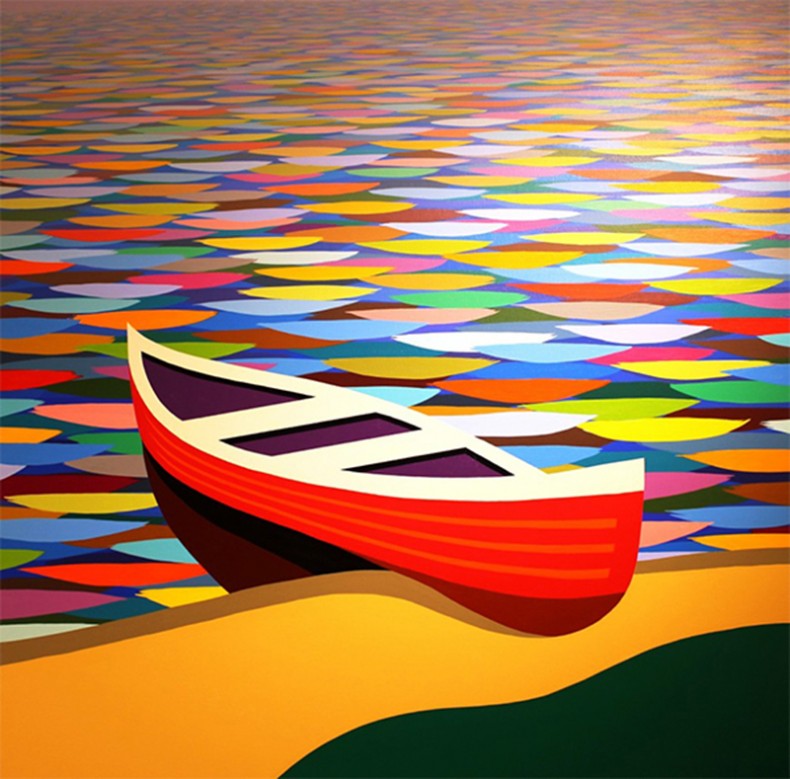 When the proprietors of legendary Canadian independent record label True North Records bought a building in Waterdown Ontario earlier this year (on the Niagara escarpment about an hour west of Toronto between Burlington and Hamilton) for their music business operations, they had planned to lease some available extra space in the building to a few local businesses in the creative cultural sector.

That plan was put on hold, however, with the arrival of a ‘eureka’ moment – why not use the space to show the visual art of music artists they were involved with? This was co-owner Mabruka Kulawick’s idea – herself a visual artist – whereupon partner and husband Geoff Kulawick began researching musicians that were also seriously talented practicing visual artists – and there were so many.

After assembling a collection of 100+ works of art by musicians that reads like a who’s who in music, the Kulawicks’ held their ‘vernissage’ private view opening of True North Gallery – The Music Gallery of Fine Art on Friday, March 25th with 100+ invited VIPs, artists and media in attendance. Special guests Buffy Sainte-Marie and Murray McLauchlan were presented in a discussion about their art and music and how they interconnect, that was videotaped for sharing through social media – the pillar of a marketing plan tooled to reach music fans – not just the typical fine art buyers targeted by traditional art galleries.

“There are millions of people who are connected to music artists in a deeply emotional way. I believe many of them want to possess a one of a kind, original work by their favourite artists, not a replicated audio file or compact disc, or a one night concert experience, but something that nobody else has, with a lasting – and incremental – value. This is our target market – music fans – and as music people with successful labels and an artist marketing background we have become experts at marketing to music fans,” says Geoff of their art gallery enterprise. “Brooke and I are extremely excited by the business prospects for the gallery, we love music, and we love art – it is so great in so many ways.”

True North Gallery – The Music Gallery of Fine Art is open daily June 15 – September 15, and by appointment only at other times, except during open house events scheduled on the website. www.truenorth.galley | www.themusic.gallery | or visit us on Facebook.

SPILL NEWS strives to keep our readers up to date with news and events in the music industry. We keep you informed of the most recent information regarding new releases, tour dates, and information items about your favourite artists.
RELATED ARTICLES
bob dylanbuffy sainte-mariehamilton
8.0