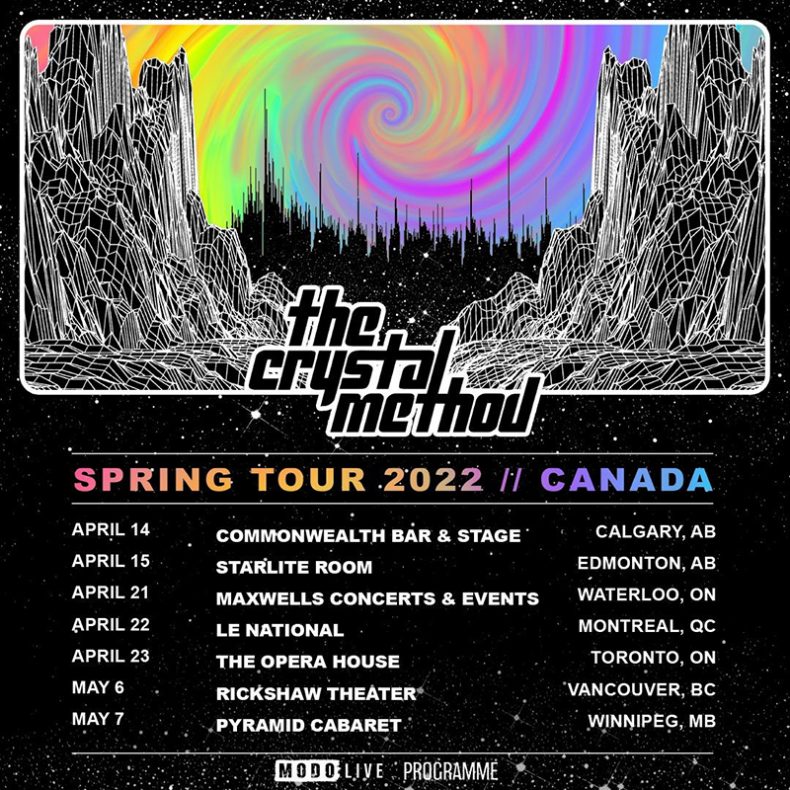 NEW ALBUM THE TRIP OUT DUE FEBRUARY 2022

Don’t miss this iconic electronic act on their Canadian tour this spring with dates in Calgary, Edmonton, Waterloo, Montreal, Toronto, Vancouver and Winnipeg!

Originally formed in Las Vegas in 1993 by co-founders Scott Kirkland and Ken Jordan (now retired), The Crystal Method is one of the most successful American electronic acts to date. Pioneers of the big beat genre and innovators of the ‘90s electronica movement, The Crystal Method has remained at the forefront of the worldwide dance music industry for more than two decades.

With this success has come an extensive discography, including: the platinum-selling, debut studio album Vegas (1997), which is one of the top-selling albums worldwide by an American electronic artist ever; and Legion of Boom (2004) and Divided by Night (2009), both of which received Grammy nominations in the Best Electronic/Dance Album category. The Crystal Method’s music has even appeared in numerous TV shows, films, video games, and advertisements.

SPILL NEWS strives to keep our readers up to date with news and events in the music industry. We keep you informed of the most recent information regarding new releases, tour dates, and information items about your favourite artists.
RELATED ARTICLES
newsthe crystal method