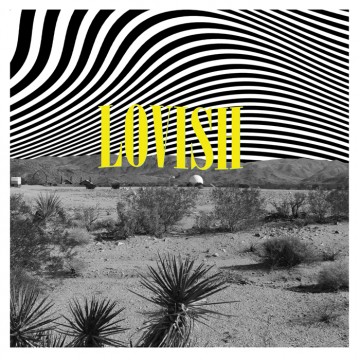 Library Voices hit us with their second single “Zzyzx” – one part love song and one part ode to a strange little place in the middle of the Mojave desert.
The story goes that back in ’44  a radio evangelist and self-proclaimed doctor started squatting there and recruited a bunch of homeless people from skid row in LA to build a 60 room mineral spa. It was complete with a church, a radio station to broadcast his rants, and an airstrip he called the Zyport.  Somehow he remained there illegally until the 1970s, selling fake medical remedies and taking money from senior citizens for his ministry until the U.S. government eventually evicted him.
He chose the name Zzyzx with the intent that it would be the last word in the English language, referring to it as “the last word in health”. When you arrive to the location today it looks more like the DHARMA Initiative basecamp in the television show Lost. We all want to live forever. We are all dying to believe in something.
Library Voices is a Canadian congregation of childhood friends who grew up on a steady diet of basement shows, science fiction, and mid-west sincerity.  Their latest album,Lovish, was once again recorded in an old funeral home and mixed by Dave Plowman and Alex Bonenfant (METZ, Crystal Castles, July Talk).
There was an extended period of time where it looked like Lovish would never see the light of day. Months of endless touring and exhaustion in support of Summer of Lust came to a boil late one night in the bowels of the saddest hostel in Amsterdam. The next day hundreds of rats swarmed their van in Paris. After those highlights the tour started to go south. The band returned home, decided they needed some space, and agreed to see other people.

Fast forward twenty four months – soon after Library Voices regrouped to begin writing what would become Lovish, singer/guitarist Carl Johnson was jumped, beaten, and left unconscious in the street in a random act of violence. The attack resulted in blood pooling on the front of his brain, a severe concussion, an inability to smell bad odors, and a long road to recovery. For a few months it remained uncertain whether he would be able to continue writing and performing music. Johnson contributed 7 songs to the album, although he still can’t detect foul scents. The remaining four tracks, including the first single “Oh Donna” and the miserabilist anthem “Sunburnt In LA” are fronted by Brennan Ross.

The band, who once printed “Pop As Fuck” t-shirts, have upped the fuzz and upped the fidelity on Lovish. The spit and hiss of an old Space Echo and a busted up tape machine runs throughout the guitar-centric album. The 11 song affair opens with the line “All of your heroes, they’re all assholes/but that don’t mean you should piss on your dreams” and then continues to both French kiss and shit talk the present for the next forty minutes or so. The band’s lyricist/multi-instrumentalist Michael Dawson jokes that he believes the government started tapping his phone after writing a song about the Prime Minister’s daughter so this time around he sticks to the much simpler topic of love.

SPILL NEWS strives to keep our readers up to date with news and events in the music industry. We keep you informed of the most recent information regarding new releases, tour dates, and information items about your favourite artists.
RELATED ARTICLES
library voiceslovishnews

by SPILL NEW MUSIC on January 9, 2018
THE LOW JOY CEILING – “BONESHAKER” A Spill Exclusive Music Premiere The Low Joy Ceiling is a guitar band from Saskatchewan. The project consists of members from Rah Rah, Library Voices, and Karpinka Brothers. Inspired by the [...]

by SPILL NEW MUSIC on February 12, 2016
Library Voices – “Slacker” Nevado Music Library Voices revealed their new video “Slacker” from their recent self-produced third LP, LOVISH, was once again recorded in an old funeral home and was mixed by Dave [...]
8.0