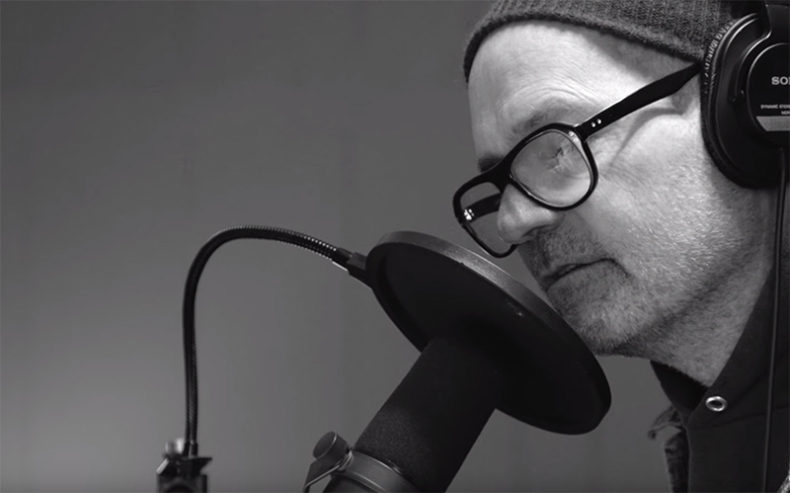 In the lead up to the release of Gord Downie’s new double album, Introduce Yerself, Arts & Crafts has shared a video that documents the creation of the album’s closing song, “The North,” courtesy of directors Jennifer Baichwal and Nicolas de Pencier. The video is an intimate look at Downie in studio during the album’s recording with producer Kevin Drew, Dave Hamelin, and engineer Nyles Spencer at The Bathouse studio in Bath, Ontario.

“A lot of these I wrote the words in advance,” Downie said at the time of recording. “Like poems. I’d get one or two a day and then I’d have to stop. Because that’s about all… the soul or whatever, would give up. And then, so with music, it becomes pretty easy.”

The twenty-three songs of Introduce Yerself were recorded swiftly over two four-day sessions in January 2016 and February 2017, with the finished album often reflecting first takes. The album continues the collaborative relationship that last year brought the music of Downie’s historic Secret Path to life, with Drew producing and co-writing a number of songs.

Introduce Yerself will be released on CD and digital tomorrow, October 27. The vinyl will be in stores December 15 in a double gatefold jacket with two pull-out posters. It is available for purchase via Arts & Crafts and Gord Downie, along with Downie’s solo records Coke Machine Glow (2001) and Battle Of The Nudes (2003).

SPILL NEWS strives to keep our readers up to date with news and events in the music industry. We keep you informed of the most recent information regarding new releases, tour dates, and information items about your favourite artists.
RELATED ARTICLES
arts & craftsgord downieintroduce yerself
8.0