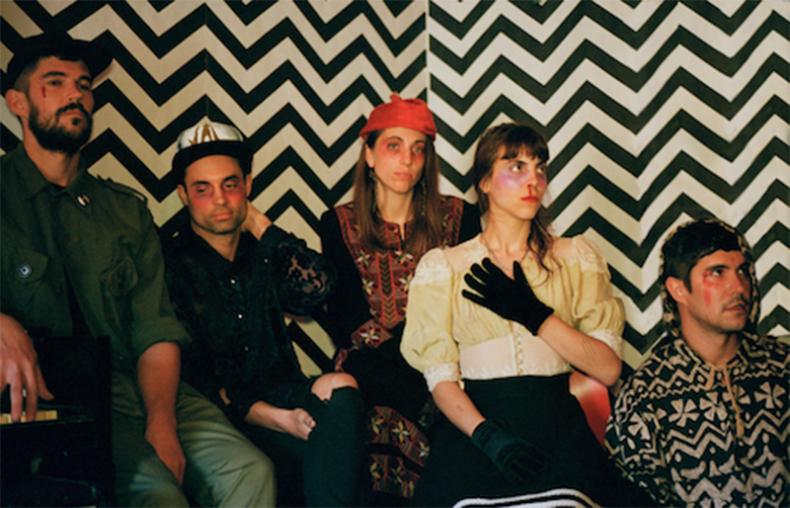 Following the recent release of their standout LP Total Time on Bella Union, Toronto electro-psych group DOOMSQUAD have announced a run of North American tour dates with Holy Fuck, as well as an NYC performance supporting Wolf Parade. To celebrate this news they have shared a remix of track “Solar Ass” by Sano. Alongside this comes the announcement that they have expanded their lineup, welcoming twin brothers Josh and Jesse Hasko (also of duo North America) into the band.

The band’s debut LP, Kalaboogie, was a self-recorded album made in the woods of Northern Canada. Released in 2014 on Toronto label Hand Drawn Dracula, Kalaboogie was a meditative survey of the Canadian landscape. Desiring connection with a national dialogue, the album was an explicit attempt to create uniquely ‘Canadian’ music by drawing on modes and myths from the wilderness.

Since then, DOOMSQUAD have continued to explore new themes and forms of expression. 2015’s EP, Pageantry Suite, marked a deviation from the band’s typically dark and meditative sound. Disco synth tones flavored with African-inspired beats contrasted with more upfront vocals, and aggressive lyrics addressing misogyny, consumerism, and hollow artifice. Pageantry Suite was their first and so far only effort to have been recorded in a studio.

This year will see the release of DOOMSQUAD’s sophomore album, Total Time, out April 29th on Bella Union and Hand Drawn Dracula. Inspired by some of their favorite artists — Georges Bataille, Richard Tuttle, Tanya Tagaq, and Genesis P-Orridge — the band travelled to the New Mexican desert to write and record. Moving through their own circadian rhythms, they fell into aural harmony while experiencing the passage of time solely as beats per minute. Total Time is all time.

Sonically, DOOMSQUAD embrace their roots; on Total Time they offer dark, pulsating beats interspersed with hypnotic, incantatory jams. The album opens with the enticing dance of “Who Owns Noon in Sandusky,” which was written to inspire the nakedness in us all, a song to wake up our inner clocks and reclaim our circadian time. “Solar Ass” was written as a love song to a donkey, a song for paying respect to the smaller, underappreciated elements that carry us through our contemporary lives. The songs on Total Time are meant to lead you through a genderless experience of transition to owning time, losing time, and becoming timeless, while providing a platform for you to dance through your consciousness.

Upon returning home from New Mexico, the band continued to draw inspiration from the Toronto arts community, which is vast but extremely supportive and close-knit. Their friendships and connections led to some fortuitous collaborations, including one with Canadian avant-garde legend, Mary Margaret O’Hara, whose otherworldly vocals grace ‘The Very Large Array.” The driving, dirty bass lines, and analogue layers of effects come care of Graham Walsh (Holy Fuck), who produced and mixed the album.

The record features a number of other contributors: Mike Haliechuk of Fucked Up plays guitar. Industrial noise experimenter David Foster aka HUREN offers vocals on “Russian Gaze.” Colin Fisher and Brandon Valdivia of free-jazz duo Not the Wind, Not the Flag bring instrumentals. And galactic twins Josh and Jesse Hasko, who perform together as North America, are a crucial part of Total Time as well. Over the years, the connection between DOOMSQUAD and the twins has deepened and this summer they’re joining forces: the Haskos are becoming members of DOOMSQUAD’s live act, which will take it further than it’s ever gone before.

Everything DOOMSQUAD does exists within their manifesto. It’s a manifesto that only they know, and their audience can’t help but feel, moving from the forest to the city to the desert, through trance, repetition, and minimalism.

* With Holy Fuck
+ With Wolf Parade

SPILL NEWS strives to keep our readers up to date with news and events in the music industry. We keep you informed of the most recent information regarding new releases, tour dates, and information items about your favourite artists.
RELATED ARTICLES
bella uniondoomsquadhand drawn dracula
8.0