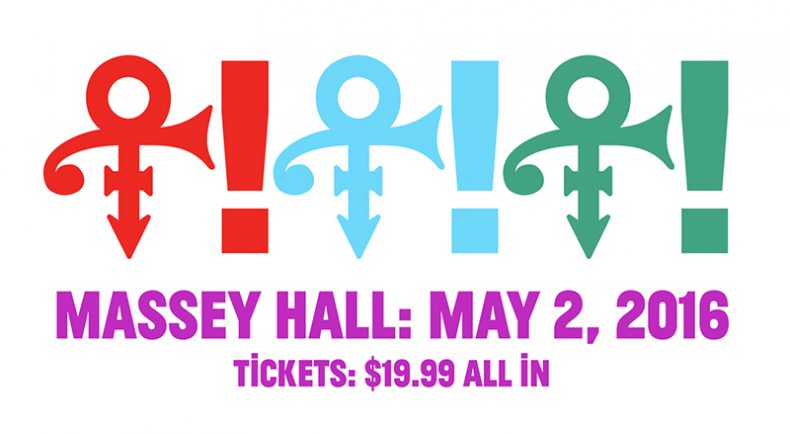 In honour of Prince’s legacy on Monday, May 2nd Choir! Choir! Choir! invite the people of Toronto to perform one of his most beloved songs, “When Doves Cry” in three-part harmony at the iconic Massey Hall. Proceeds from the event will be donated to two Toronto music education charities, the Regent Park School of Music, a non-profit community music school whose mandate is to provide music education to underprivileged youth in Regent Park and other areas of the City of Toronto, and Massey Hall And Roy Thomson Hall’s Share The Music education and outreach program.

“For more than 5 years, C!C!C! have met twice weekly to celebrate the songs that define our lives.” remarks Nobu Adilman, co-founder of C!C!C! “When we heard the news about Prince we were shocked and upset. Like most people, we wanted to get together and share our love for his music. The outreach from the community was instant as it was overwhelming – it was obvious people were mourning and wanted to come together.”

Attendees for the night’s event will arrive at Massey Hall, receive a lyric sheet and be seated in their proper vocal section. Over the course of two hours Goldman and Adilman will teach the audience the song in three part harmony, engaging the entire room in a powerful, well-rehearsed finale.

Choir! Choir! Choir! just recently returned from a two night musical tribute of the late David Bowie at Carnegie Hall and Radio City Music Hall in New York City, where the group engaged thousands of people in singing a finale of “Space Oddity”. The finale performance was dubbed ”an emotional high point” by the Wall Street Journal. The offer to perform by the show’s producers came after C!C!C!’s tribute to the music of David Bowie at The AGO went viral online.

“The world of music has lost too many legends in 2016. We want to do everything we can to respect and celebrate them” says Adilman. “Prince was all love, deep funk and pure rock. His style and songs made for the world’s most inclusive dance party, so let’s go crazy, gather thousands of singers, and pay respect to the enormous legacy he left behind.”

SPILL NEWS strives to keep our readers up to date with news and events in the music industry. We keep you informed of the most recent information regarding new releases, tour dates, and information items about your favourite artists.
RELATED ARTICLES
choir choir choirdavid bowiemassey hall